Accomplishments of our Campaign for Bedouin-Jewish Justice in Israel 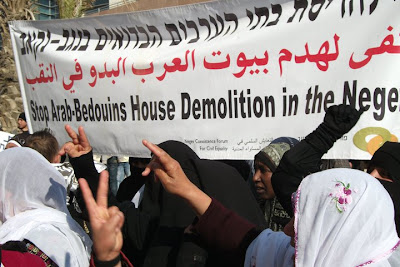 Here’s a selection from what we’ve accomplished in the public arena in our Campaign for Bedouin-Jewish Justice in Israel, creating mounting pressure on the Jewish National Fund to end the demolition of Bedouin homes in order to plant forests in the Negev:

1) After many months of mounting pressure by us and our coalition partners, JNF in Israel completely dismantled its work camp near the demolished Bedouin village of Al-Arakib on March 24, 2011, removing all its bulldozers and other heavy earth-moving machines. JNF did not finish digging holes for tree planting over the village grounds.

2) We and our partners in Israel – Rabbis for Human Rights and the Negev Coexistence Forum - have been quietly meeting both with supporters of JNF-US and board members of JNF-Israel (KKL-JNF), arranging meetings for them with Bedouin leaders, giving them the facts and urging them to support a freeze in home demolitions in Al-Arakib and other Negev Bedouin villages.

As a result, JNF Israel Board members from Reform Judaism (the Israel Movement for Progressive Judaism), the Green Zionist Alliance and Meretz, and a growing number of JNF Israel board members have been won over to our stance and are expressing their views to top JNF officials in Israel.

Please support our work by making a tax-deductible gift to Rabbis for Human Rights-North America for the Campaign for Bedouin-Jewish Justice in Israel – click here to contribute to our efforts to build a Jewish democratic Israel where Arabs and Jews in the Negev enjoy truly equal rights as citizens.

3) Our coalition invited our supporters to phone JNF offices to deliver the message to JNF, clogging phone lines and voicemail boxes at JNF-US headquarters in New York, L.A., and other cities.

4) We and our allies invited people to post messages of protest on JNF’s Facebook page, and hundreds of messages were posted, exposing thousands of JNF supporters, many for the first time, to the facts about what JNF is doing in the Negev.

5) The Forward carried a hard-hitting feature article “A JNF Drive To Make the Desert Bloom Means Destruction for a Bedouin Village” about our campaign and what JNF and the Israeli government have been up to in the Negev. Read the Forward article here.

6) Ha'aretz columnist Bradley Burston described our and the villagers’ struggle to end the demolitions of Bedouin homes at Al-Arakib as one of two prominent examples, along with Sheikh Jarrah, of the emerging democratic revolution in Israel.

7) Peter Beinart delivered a powerful keynote speech at the J Street conference, before an audience of several thousand activists, calling on American Jews to embrace "our task, in solidarity with the Israelis and Palestinians risking their lives in places like Sheikh Jarrah and Al-Arakib and Bil’in...to resanctify the land." Watch the video of his stirring speech, or read the text, here.

8) Rabbi Arik Ascherman of Rabbis for Human Rights published an “Open Letter to the Jewish National Fund: Just Say No!” in the Jerusalem Post.

9) Devorah Brous, co-director of our Campaign for Bedouin-Jewish Justice, published “Where are the Jewish Greens?” in Tikkun, and “Seeing the Unseen: The Forgotten Palestinian-Israeli Problem,” in the Jerusalem Report.

10) JNF Washington DC Board Member and Chair of the JNF-funded Friends of the Arava Institute for Environmental Studies urged JNF in a Jerusalem Post op-ed to end the demolition of homes in unrecognized villages and the planting of trees on lands that are in dispute with the Bedouin. (“JNF, BDS and the Beduin,” Jan. 19, 2011)

11) Our campaign has helped generate over 8,000 signatures on online petitions of protest to Prime Minister Netanyahu and JNF leaders, and continues to grow. If you've not yet done so, please click here to add your voice now.

12) We've forged and maintained an international coalition of 36 Israeli and American Jewish groups who are now working in concert for the first time to end the plight of the 200,000 Negev Bedouin.

13) Working with our partners in Israel and the US, we're proud to have broken the story of the role with JNF of GOD-TV and other Evangelical Christian groups in planting a one-million tree forest, many near Al-Arakib, as part of the government's plan to displace the Bedouin. For the latest media coverage, please go here.

We're working for a Jewish democratic Israel where Arabs and Jews in the Negev, and throughout the land, enjoy fully equal rights as citizens.

Support our work by making a tax-deductible gift to Rabbis for Human Rights-North America for the Campaign for Bedouin-Jewish Justice in Israel – click here to contribute whatever you can. Help us go from strength to strength!
Posted by Jewish Alliance for Change at 10:01 PM