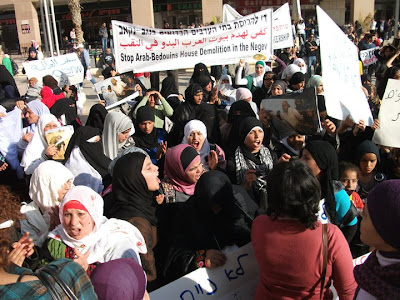 January 25, 2011—The Beer Sheva District Court, which issued a temporary injunction a week ago stopping all further work by the Israel Land Administration (ILA) and the Jewish National Fund (JNF) in the Negev Bedouin village of Al-Arakib, decided on Sunday, Jan. 23, not to extend the injunction, permitting the village to be permanently destroyed and replaced by a JNF forest. Judge Nechama Netzer “recommended” to the JNF not to “rush” the afforestation of Al-Arakib, but failed to order the Israeli Government, the ILA and the JNF to stop their efforts to wipe out the village.

We, a coalition of 18 ideologically diverse Israeli and American Jewish organizations, strongly oppose the court’s decision. This ruling reflects the continued abuse of the law and the courts in Israel to expropriate land from the Bedouin, define their villages as “illegal” and arbitrarily reinterpret Ottoman, British and Israeli law to insure maximum Jewish control over land in Israel, discriminating against non-Jews in its allocation, ownership and use and denying the human and civil rights of Israel’s Bedouin citizens.

By contrast, the Israeli Government has retroactively legalized large Jewish family farms in the Negev, and does little to enforce the law against some 100 Jewish settlement outposts and thousands of settler homes in outposts in the West Bank – which are illegal under Israeli law. Yet the Israeli Government and judicial system perpetuate injustice by continuing to enforce an already discriminatory law against the villages and homes of the Negev Bedouin, just a few miles away. This despite the fact that the Bedouin have lived in the Negev and farmed their lands for centuries, living in villages like Al-Arakib since before the founding of the State of Israel, as the generations-old cemetery at Al-Arakib testifies. Both the Israeli Government and the Israeli courts have systematically used the law, and its highly selective enforcement, to promote Jewish settlement – whether in the West Bank or the nearby Negev – at the expense of the Palestinian and Bedouin Arab residents.

While we welcome Judge Netzer’s recognition of the need for legalizing Bedouin villages and rhetorical opposition to JNF’s attempt to use afforestation to irreversibly change the status of the land at Al-Arakib, we remain deeply concerned by Judge Netzer’s lack of effective legal action and acquiescence in the ILA and JNF’s polices of displacement. Judge Netzer stated that “There is no question that it’s time to solve [the problem of the Bedouin] so that in the future people like the Bedouin of Al-Arakib will be able to build [homes] legally, to establish settlements without suffering the risk that many years later their settlements would be dubbed unrecognized villages.”

Judge Netzer also recognized the insidious logic behind the JNF’s attempt to use tree-planting to permanently replace the village of Al-Arakib with a forest: She stated that “It is doubtful whether planting trees can be considered maintaining the status quo, not only because of the political implications of such planting, but especially in view of the fact that such planting is tied to the ground and the possibility that one day these actions could pave the way for other actions, possibly providing the basis for the claim that the reality on the ground has changed and therefore the situation has become irreversible.”

We remain deeply concerned that Judge Netzer did not see fit to issue a permanent injunction barring the ILA and the JNF from continuing to demolish the village and replace it with a JNF forest. We are deeply disturbed that the ILA has already issued a statement on Jan. 24 (in Hebrew only) making clear their intent to “continue to prepare the ground [in Al-Arakib] for planting” by the JNF.

We urge the Israeli Government, the ILA and the JNF to honor the recommendations of the court. We call on leaders and supporters of JNF in the US, Israel and around the world to urge the organization to suspend this project and to refrain from planting forests on demolished Bedouin villages and on lands claimed by the Bedouin until a just and mutually acceptable solution is found.

Some 500 Israeli Jews and Arabs demonstrated together on Jan. 23 in front of the Beer Sheva District Court calling for an end to the demolition of unrecognized Bedouin villages in the Negev and for the government to recognize and provide basic services to these villages. (For photos of the demonstration, click here or visit http://www.flickr.com/photos/bedouin-jewishjustice/)

More than 7,500 American Jews and others have signed our newly launched petitions telling Israeli leaders and the leaders of the JNF in the US and in Israel: We will not stand by as you try to wipe out an entire Arab village in Israel! The petitions are at the following sites:

Petition to JNF Leaders in the US and Israel: End JNF complicity in displacing Israel's Negev Bedouin
http://www.change.org/petitions/view/equal_rights_sustainability_and_development_for_israels_negev_not_dispossession_of_the_bedouin

Background: A large Israeli police force, accompanied by bulldozers from the Israel Land Administration, demolished the Negev Bedouin village of Al-Arakib for the 9th and 10th times on January 16 and 17th, destroying the temporary homes constructed by the village residents since the previous demolition. The Israeli Police shot unarmed residents with rubber bullets and beat them with batons; eleven people were injured, five of whom required hospitalization. (Photos of the injuries and beatings of residents by the Israel Police are also at http://www.flickr.com/photos/bedouin-jewishjustice/).

The police arrested twelve residents and Israeli human rights activists including Haia Noach, Director of the Negev Coexistence Forum for Civil Equality – winner of this year’s Emil Grunzweig Prize for Human Rights from the Association for Civil Rights in Israel – and Tel Aviv University historian Prof. Gadi Algazi. Ms. Noach and three Bedouin residents have since been charged with “disobeying a court order” and “forcibly invading/holding state property;” a fourth resident has been charged with trying to “harm a police officer.” With the help of volunteers, the residents have already begun the reconstruction of the village, and have vowed to keep rebuilding until the Israeli Government recognizes their rights to their land.

ILA Development Department Director Shlomo Zeiser, whose organization dispatched the bulldozers to raze the village, told the Israeli news outlet YNET (1/16/11 – Hebrew edition only) that the ILA is making an effort to find a final solution to what's happening in Al-Arakib. “We are preparing the ground for planting,” he said, clearly implicating the Jewish National Fund (JNF). The JNF last week built a new camp in Al-Arakib (under Israel Police protection) for its bulldozers to cover the demolished village with a forest. This act would prevent the return of the Bedouin to their land forever.

Opposition to the Actions of the Israeli Government, the ILA and the JNF in Al-Arakib: Our coalition of Israeli and American Jewish organizations calls on the Israeli Government, the ILA, the JNF in Israel (KKL) and JNF-US to end their efforts to expel the 300 Bedouin women, men and children of Al-Arakib and to replace their village with a JNF forest. We urge them to negotiate a just and mutually agreeable solution to the plight of the 190,000 Negev Bedouin, Israel’s poorest and most disadvantaged minority – half of whom live in “unrecognized villages” without electricity, running water, sewage disposal, schools or health clinics, and with the constant fear of demolition and expulsion.

We condemn the JNF for its complicity in displacing Bedouin citizens of Israel from their homes and land to make way for forests and new Jewish-only communities in their place. The Bedouin have no comparable opportunities to create new agricultural or livable communities. They are being forced to leave their homes, lands and way of life for overcrowded urban centers plagued by crime, unemployment and despair.

We believe in an Israel where Jews live in partnership and equality with their Bedouin and other Arab and Palestinian neighbors, the basis for trust and peaceful coexistence. The Israel of the JNF, the ILA and the Israeli Government is one where Bedouin Arabs are displaced and discriminated against so that forests and exclusively Jewish communities funded by Jews and Evangelical Christians can be built, preventing Bedouin Israelis from ever returning to their land, forcing them to live in poverty and neglect.

JNF has continued to side-step the concerns we have raised and has responded only with misdirection and misinformation. We again issue this call to JNF for open and honest public discourse on these issues. We call on the Israeli Government and the Jewish National Fund to rededicate themselves to the ideal enshrined in Israel’s Declaration of Independence of equal development for all of Israel’s citizens, regardless of religion, nationality or gender. Until it takes a stand against the demolitions and expulsion of Bedouin citizens, and aligns its forestation and development practices with human rights and the universal values enshrined in Israel’s Declaration of Independence, JNF cannot begin to remove the moral stain of complicity in such acts.

From the US:
■ Jewish Alliance for Change ■ Rabbis for Human Rights-North America ■ Jewish Voice for Peace ■ The Workmen's Circle/Arbeter Ring ■ Tikkun Community ■ Network of Spiritual Progressives ■ The Shalom Center

The list of organizational endorsers is currently in formation; additional organizations will be added to the online version of the statement here.

Posted by Jewish Alliance for Change at 2:59 PM