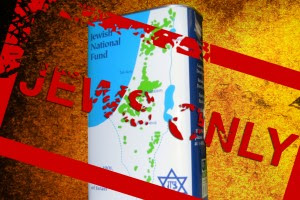 Scroll down to find the Jewish National Fund office near you and the national headquarters, and call to give JNF the message:

Sample call script: "My name is ______ , [I'm an American Jew] and I care deeply about and its increasingly eroding democracy. I’m calling today to urge you to tell Israeli government leaders that JNF is opposed to the Netanyahu government’s plan to forcibly expel 1,000 Bedouin men, women and children from their homes and demolish the Negev Bedouin villages of Atir and Um Al-Hiran, so that a new Jewish settlement called Hiran can be built on their land.

"Tell Israeli government leaders that these terrible acts are slated to take place near JNF’s Wadi Attir Project, and that JNF will not stand idly by as the Netanyahu government prepares to blatantly discriminate against Israel's Bedouin Arab citizens. These actions further undermine democracy in and violate ’s commitment to equal rights for all citizens, Jewish and Arab alike, as enshrined in its Declaration of Independence and in human rights treaties which has signed.

Let us know how it went! After your call, email us at editor@jews4change.com and let us know how your call went. Your feedback will be most valuable in planning the next steps in our campaign to persuade the JNF and the Israeli government to do the right thing. Please copy and paste the following into your email and provide us with your responses:

Which offices did you call?

Tell us about how your call went.

What was the response?

Go here to view a map of the Bedouin villages to be demolished and their proximity to JNF's Wadi Attir Project.

Posted by Jewish Alliance for Change at 7:50 PM