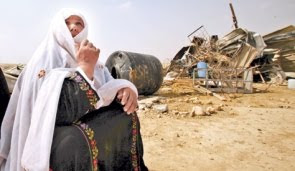 The state filed an unprecedented suit against 34 Negev Bedouin in Be'er Sheva Magistrate's Court on Tuesday, seeking NIS 1.8 million in damages for the expense repeatedly incurred in evicting the defendants from state land and demolishing their homes.

The state, through the Israel Lands Administration, told the court that the defendants had built homes in the Al-Arakib area, northeast of Be'er Sheva, on what had been state land since the time of Ottoman rule.

"The squatters against whom the suit was brought, of the Abu Madigham and the Abu Jaber families, already have houses built on land the state gave them in the area of Rahat," the court was told by the ILA, representing the state. The ILA said the defendants keep returning to the disputed land, despite court orders prohibiting them from doing so.

The agency's representative told the court the fact that the Bedouin have homes in Rahat, some distance from Al-Arakib, shows they have no lack of housing, and that they are using public relations activities to accuse the state of repression, while they are the ones in breach of the law.

The ILA said that it had leased the lands in question until 1998 for seasonal agricultural activities for Bedouin in the area. But, in 1998, members of the defendants' families ousted the leasees and began squatting on the land.

In 1999, the state took action to evict the squatters, according to the prosecution.

In March 2000, the parties consented to a judgment in which a permanent injunction was issued barring the squatters from the land except to visit a cemetery and a small mosque, the only structures on the land at that time.

A source in the ILA said that suing for damages "can be an efficient way to deal with squatters and illegal construction."

Sheikh Siyah Abu Madigham al-Turi, the leader of the village of Al-Arakib, said neither he nor any of his family was told about the lawsuit, and that he first heard about it from the media.

"We also submit a lot of complaints but no one listens to us, about all the buildings of ours that they destroyed - and the state does not care. The first demolition cost us NIS 4 million. The trees that were uprooted in the village cost us NIS 500,000. They destroyed the village 27 times; that cost us NIS 150,000 each time.

The sheikh said the land belonged to them - and that the matter is still under consideration by the courts.

Dr. Awad Abu-Frih, a resident of Al-Arakib and an activist in the campaign against its demolition, told Haaretz the residents expect compensation from the state, not the other way around. "The state is afraid of a precedent over Al-Arakib, and so they talk to us in a language reserved for enemies who must be defeated, so the hold over the land won't be an inspiration to other Bedouin in the Negev."

Abu-Frih said hundreds of Bedouin, who are joined by Jewish and foreign volunteers, come to rebuild the village every time it is demolished.

The residents and activists are to hold a march Wednesday night from the Lehavim junction north of Be'er Sheva to Al-Arakib.

Dr. Thabet Abu Ras of the human rights group Adalah also said the matter is still before the courts. "The state recognizes ownership rights over the lands of Al-Arakib and is constantly offering them [the Bedouin residents] meager compensation for the land. What's more, a law requiring the builder of a house to pay for its demolition was not passed by the Knesset."

The state has demanded compensation for the demolition of illegally built houses in the past in the Galilee and the Arab communities of central Israel; those cases are still before the courts. However, most of those claims are against homes built on private land, not state land, for sums between NIS 300,000 and NIS 400,000. This is the first time such a large suit for damages has been brought against such a large number of defendants.
Published in Ha'aretz, July 27, 2011

Posted by Jewish Alliance for Change at 1:17 PM