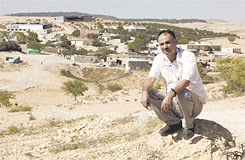 Click here to view the map of the Negev showing the location of the two Bedouin villages the Netanyahu government plans to demolish for a new Jewish settlement, and to view their proximity to JNF's Wadi Attir Project.
Excerpts translated from Ha'aretz, June 3, 2011:
"The government is expected to approve in the coming weeks the [Praver] ‘Implementation Plan for the Goldberg Report’ and the evacuation of 30,000 Negev Bedouin to new neighborhoods in recognized settlements. From documents uncovered by the Adallah Legal Center which have reached Ha’aretz it is clear that in one of the areas of the Bedouin villages slated for evacuation, the government is planning a new Jewish settlement. This is despite the fact that the Prime Minister’s Office has claimed that the Bedouin who will be evacuated are living in settlements that are not appropriate for infrastructure and public buildings, or that this land is not included in the Development Plan for Metropolitan Beer Sheva.
“The Bedouin villages of Atir and Um Al-Hiran, on whose land the government plans to establish a Jewish settlement, are located in the area of Wadi Atir, near Road 316, east of Hura. The 1,000 residents of the village…are from the Bedouin tribe that has lived in a nearby agricultural area northwest of Beer Sheva since before 1948…In 1956, they were evacuated by the Israel Defense Forces so that the area could be used for military training, and were moved to the area in which they live now in Wadi Atir.

“In recent years, the government began planning the new Jewish settlement, to be called Hiran, which will have 2,400 residential units by 2030, and a population of 10,000. Based on these development plans, the government initiated demolition orders for the Bedouin homes in the two villages and the eviction of the Bedouin residents.

“Despite the fact that a professional Construction and Planning Committee of the local municipal authority in the area recommended that the two Bedouin villages be recognized, Ha’aretz reported in November 2010 that the Prime Minister’s Office intervened to prevent recognition for Atir and Um Al-Hiran.

“The Bedouin residents are currently engaged in a legal struggle against the evacuation and demolition orders…in the Beer Sheva District Court, the Kiryat Gat District Court and the Supreme Court…According to the new development plan for Hiran, the new Jewish residential units will be built in the area where Bedouin homes are currently situated in Um Al-Hiran…”

The article goes on to say that unlike many other Bedouin homes in unrecognized villages, the homes in Um Al-Hiran and Atir are built from stone (suggesting that the residents expected the village would be recognized and that their homes would be permanent and not subject to demolition; hence the use of more costly building material.)

It quotes Salim Abu Al-Kayan, a Bedouin resident of Um Al-Hiran, who describes the strong opposition of the residents to being forced out of their homes and lands again after having been compelled to move there by the IDF in 1956: “They are planning to build a Jewish settlement called Hiran here. There is no reason why we [the village of Um Al-Hiran] shouldn’t be annexed to the new Jewish settlement and allowed to remain on our land.” Salim’s brother, Najah, agreed: “We’re happy to become a neighborhood in the new Jewish settlement, or to be considered a neighborhood of Hura.”

Said Salim, “I have children serving in the IDF. What am I supposed to tell them when their country destroys the home in which they live?”

Translation of excerpts from an article which appeared only in the Hebrew edition of Ha’aretz, June 3, 2011, titled “Netanyahu government plans to build a Jewish settlement on the land of a Bedouin village that will be ‘evacuated.’” English translation by Gidon D. Remba, Co-Director, Campaign for Bedouin-Jewish Justice in Israel.

See also Umm al-Hieran: Objection to Planned Jewish Town that would Entail Demolishing Bedouin Village: Press Release, Bimkom: Planners for Planning Rights, Jan. 16, 2011, English, below.
Adalah, Bimkom and Residents of the Unrecognized Village of Umm al-Hieran in the Negev/Naqab Submit Objection to Plan to Build Jewish Town of “Hiran” after Demolishing Arab Bedouin Residents’ Homes and Evacuating them from their Village:

On 12 January 2011, Arab Bedouin citizens of Israel who are residents of Umm al-Hieran, the southern area of the unrecognized village of Atir-Umm al-Hieran, in cooperation with Bimkom – Planners for Planning Rights and Adalah submitted an objection to the National Council for Planning and Building (NCPB) against the building of a new exclusively Jewish town to be called “Hiran” on the land on which Atir-Umm al-Hieran is located (the Nahal Yatir area).

The master plan (Plan 15/02/107) aims to build the Jewish town of ‘Hiran’ after demolishing the homes of the 500 Arab residents of Umm al-Hieran and evacuating them from the area that falls within the plan's boundaries. According to the Hiran master plan, most of the Arab Bedouin residents’ homes are located in the zone designated for residential buildings, while others are situated on land designated for public use, including a proposed forest.
The objection argues that the plan would entail the demolition of Arab Bedouin homes and the forced eviction of the residents who have lived in the area for more than 55 years, resulting in gross violations of the constitutional rights of the residents to property, dignity and equality. In addition, the planners and planning authorities did not examine alternatives that would have avoided the violation of these rights, such as recognizing Umm al-Hieran and providing a planning solution that would regularize its status.

Cesar Yeudkin, an urban planner with BIMKOM, stated that: “The plan completely ignores the situation on the ground and the rights of the Bedouin residents. It is evidence of the government’s policy to concentrate the Bedouin into a few recognized towns. Furthermore, this plan represents another instance of discrimination against the Bedouin community in the Naqab in the division of land and resources .”

The objection recalls that after a seven year-long planning process, the NCPB decided, on 20 July 2010, to recognize the northern area of the village of Atir-Umm al-Hieran, where the residents of Atir live; and accepted the proposal that the residents of Umm al-Hieran would move to Atir, according to a specific time-line and process. Prime Minister Benyamin Netanyahu's office intervened in the decision and requested that the NCPB reconsider its decision. The NCPB committee members complied with the request and withdrew the recognition. It did so without hearing the position of the residents and in contravention of the rules of good governance.

Adalah Attorney Suhad Bishara argued: “All the facts included in the objection lead us clearly to conclude that the plan was designed to give preference to the interests of the Jewish residents over and above the interests of the Arab Bedouin who have lived in this village for more than 55 years. This is a blatant violation of the people’s right to equality. The practical consequences of evacuating a certain group of residents in favor of another, based on nationality and/or religion, are very harsh. This constitutes a policy of segregation which is reminiscent of dark regimes from the past.”

Posted by Jewish Alliance for Change at 7:20 PM