“Cabinet ministers will vote on the evacuation of 30,000 Bedouin from their homes" - translation from the Hebrew, with commentary 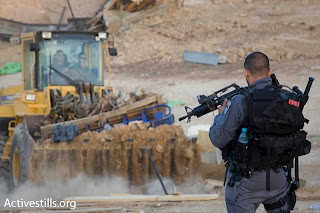 “Cabinet ministers will vote on the evacuation of 30,000 Bedouin from their homes,” Ha’aretz, June 2, 2011, Hebrew edition

“The Prime Minister’s Office has prepared a new report for resolution of Bedouin settlement in the . 40% of the 71,000 residents of the “unrecognized” Bedouin villages will be relocated from their homes, at a cost of 6 – 8 billion shekels.” http://www.haaretz.co.il/hasite/spages/1230017.html

“The new plan is the Praver Report for Implementing the Goldberg Commission Recommendations for Resolution of Bedouin Settlement in the , and will be presented for approval by the government in the coming weeks. The cost will come to 6 – 8 billion shekels, of which 1.2 billion will be allocated for economic development plans for the recognized Bedouin villages.

"Under the plan, residents who live or work land on which they claim ownership will receive replacement land equal to half the area they claim; residents who claim land of which they are not in actual possession will receive monetary compensation at double its value.” [However, Clinton Bailey, one of the leading experts on the Negev Bedouin, has pointed out in a Ha’aretz op-ed that the net value of the monetary compensation amounts to one-sixth to one-eighth of the market value per dunam of land in this area of the .[1]]

“The report attributes great importance to law enforcement mechanisms, both in terms of significant augmentation of the police force and the legal system,” possibly including new courts. Many Bedouin leaders and heads of the Jewish municipalities in the area are unhappy with the plan and are planning to take legal action against it once it is approved.

“Dr. Awad Abu Freich, one of the most prominent Bedouin activists in the Negev, described the plan as a disaster that would lead to harsh conflict with the Bedouin residents of the .”

The Netanyahu government’s new plan contradicts the findings of the Goldberg Commission: “The Regional Council of Unrecognized Villages, together with Israeli human rights organizations, have stressed in an Open Letter to Prime Minister Netanyahu and his Cabinet ministers, that the new plan stands in complete contradiction to the Goldberg Commission’s recommendations, thwarting entirely the Praver Committee’s purpose, which was to develop a plan to implement Goldberg’s recommendations.”

“They point out that the Praver Report runs contrary to the main principle of the Goldberg Commission’s recommendations, which was to ‘recognize [and develop] the unrecognized villages wherever possible.’ The Praver Plan also goes entirely against the norms of modern planning policy, by requiring the forced relocation of 20,000 – 30,000 citizens from their homes without valid reason and completely against their wishes.”

All of the following material is also omitted from the English version of the Ha’aretz article:

2. The government’s plan suffers from a democratic deficit: Razi Abu-Kaf, director-general of the Council of Unrecognized Bedouin Villages in the Negev, stated that “during the entire period during which the ‘Praver Implementation Committee’ in the Prime Minister’s Office worked on its plan, we asked them to enable us, along with other representatives from the Negev Bedouin community, to participate in the plan’s development. To our regret, we were ignored. The plan perpetuates the government’s unilateral, force-based approach of steam-rolling over the Bedouin, which has caused great suffering and failed to bring about a real solution.”

Bedouin Israeli Attorney Rauya Abu Ravia added that “the Goldberg Commission found that the government has committed an ongoing injustice to the Bedouin that must be remedied….The Praver Plan cannot be implemented; it is cruel and perpetuates discrimination against the Bedouin” as a non-Jewish minority in .

“This means recognizing and developing the unrecognized villages [as the government did with many originally unauthorized Jewish settlements and single-family farms in the Negev,] providing them with basic infrastructure and public buildings as the government does for Jewish communities in the . The government’s failure to do so has caused environmental neglect and great harm to open areas in the , polluting both water and land. The government’s proposed 1.2 billion shekel 5-year development plan, expected to be approved along with the Praver Plan, deals only with the recognized Bedouin villages.”

[Comment: No one objects to the government’s interest in providing economic development for the Bedouin. But the government can develop the unrecognized Bedouin villages, as the Goldberg Commission recommended, rather than uprooting tens of thousands of citizens against their will and attempting to concentrate them in urban townships in a limited space.

By contrast with Bedouin Israelis, Israeli Jews who live in the Negev can choose the type of community they wish to live in, including single-family farms, moshavim or towns; they can choose between agricultural, urban or village communities. The state established the seven Bedouin urban towns without consulting the Bedouin, without asking them how they wished to live, or how they perceive their needs. The government then pressured some 60% of the Negev Bedouin to relocate to these townships and to surrender their agricultural land, by denying recognition and essential services to their existing settlements, demolishing homes and consistently rejecting their claims to land ownership.]

“Dr. Sandy Kedar, a professor of law at the of who specializes in land administration in , said that it’s clear that the Praver Committee has committed a serious error by failing to include the Bedouin in the planning process. ‘I believe that the fact that Bedouin are being treated by the government as if they are not a party to the discussion, and that the entire process is being [imposed] on them without their participation, greatly harms its chances for success.’

“Kedar’s proposal for resolving the conflict between the Bedouin and the state is, among other things, to provide the Bedouin with fair compensation comparable to the market value compensation that the [Jewish settler] evacuees from Gush Katif [in ] received. They should also be provided with agricultural land on which to live, like all other Israelis who wish to live in the . It’s unreasonable that every Tel Avivi who decides that his great life’s wish is to raise goats in the , receives land for this purpose without any problem, whereas the government ‘proposes’ to the Bedouin, whose connection to the land is part of their identity, to move to urban townships.”

A substantially abridged and re-written version of this article also appeared in the English online edition of Ha’aretz under the headline “Netanyahu's office promoting plan to relocate 30,000 Bedouin,” http://www.haaretz.com/print-edition/news/netanyahu-s-office-promoting-plan-to-relocate-30-000-bedouin-1.365409), which attempts to present the plan so as to make it appear justified, inserting a pro-government slant into its reportage. The more complete Hebrew article, which is twice as long as the English version, is considerably more critical of the plan. We have provided an English translation of key passages from the Hebrew article.

Ha’aretz English edition rectified the omission of the many criticisms of the plan in the original Hebrew article by publishing a separate piece in a different section of the paper (The Marker): Bottom shekel / Civil rights groups: Prawer plan for Bedouin won't work; The Association for Civil Rights in Israel argues that the conditions the Prawer Report sets for recognizing Bedouin villages are prejudicial, June 2, 2011, English.

Text is above is a translation by the Campaign for Bedouin-Jewish Justice of the Hebrew article: “Cabinet ministers will vote on the evacuation of 30,000 Bedouin from their homes,” Ha’aretz, June 2, 2011, Hebrew edition

Posted by Jewish Alliance for Change at 3:42 PM