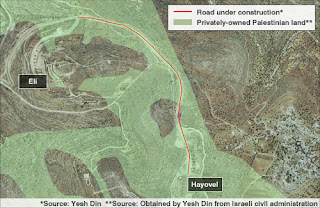 Move is Netanyahu government's first confiscation of land in the territories.

For the first time in three years, the state has confiscated uncultivated land in the . The land will be used to legalize a nearby settlement outpost.

Last week, acting on orders from the government, the Civil Administration declared 189 dunams of land belonging to the Palestinian to be state land, so as to retroactively legalize houses and a road in the Hayovel neighborhood of the settlement of Eli. This would seem to violate 's long-standing commitment to the not to expropriate Palestinian lands for settlement expansion.

An Ottoman land law dating from 1858 allows uncultivated land to be declared state land. This law, which is still in force in the , is what was used to carry out the expropriation.

According to last Sunday's decree, the lands in question belong to the . Hayovel was built on these lands in 1998 as a temporary outpost, and later permanent houses and an access road were built. A 2005 report on the outposts by attorney Talia Sasson concluded that Hayovel was built on private Palestinian land.

After the Peace Now and Yesh Din organizations petitioned the High Court of Justice against the construction in 2005 and 2009, the Civil Administration reviewed the land's legal status. Since , which ruled the from 1948-67, had never registered them in its land registry, the Civil Administration reclassified them as under review. This meant that any place that was still cultivated in the late 1990s would remain private land, but the rest could be declared state land.

In 2004, then-Prime Minister Ariel promised U.S. President George W. Bush to stop this practice, and this promise was later reiterated by his successor, Ehud Olmert. In his speech at in 2009, Prime Minister Benjamin Netanyahu said, "We have no intention to build new settlements or set aside land for new settlements. But there is a need to have people live normal lives and let mothers and fathers raise their children like everyone in the world."

This is the current government's first such expropriation of lands. The last lands to be similarly expropriated were 20 dunams near Betar Ilit that were declared state land in November 2008 to allow the construction of a gas station.

The declaration is another move toward retroactively legalizing Hayovel. The Palestinians now have 45 days to appeal to the military appeals committee. But the road to full legalization is still long, as the entire settlement of Eli lacks an approved master plan.

Peace Now chairman Yariv Oppenheimer said Netanyahu and Defense Minister Ehud Barak were going to great lengths to legalize isolated outposts deep in the territories, even if this involves land expropriations, but "as far as evictions are concerned, the state is dragging its feet." He said this will encourage settlers to keep building illegally.

Eli's mayor, Kobi Eliraz, said he is glad the state is making progress toward formalizing the status of the Hayovel neighborhood.

For background on the state-funded building of the illegal settlement outpost of Hayovel near the West Bank settlement Eli, on privately-owned Palestinian land, see "New Support for West Bank Outpost," BBC, March 26, 2009

Posted by Jewish Alliance for Change at 7:48 PM