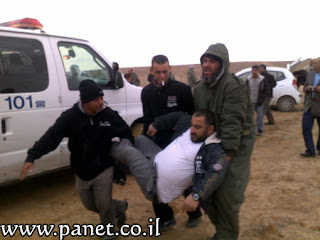 "We are making an effort to find a final solution to what's happening in Al-Arakib." - Israel Lands Administration Development Director Shlomo Tsizer (Ynet, Hebrew edition only - omitted from English version)

ILA Development Director Shlomo Tsizer: "We are preparing the place for planting, to protect the ground." - implicating JNF-KKL as the body that will do the planting. (This statement appeared in the original Hebrew version of the Ynet article, translated by this blog's editor, and omitted from Ynet's translated report in English.)

Shows that JNF-KKL is party to Netanyahu-Lieberman government's effort to prevent Al-Arakib from ever being rebuilt.

This time everything is being removed to make it more difficult for the residents to rebuild.

11/17 11 pm Israel time update: Beer Sheva Court has temporarily stopped the ILA/Israeli govt's bulldozers from continuing to prepare the ground for JNF planting in the now demolished village of Al Arakib. The Bedouin have for the moment stalled the gov't's effort to permanently wipe out their village.

Click here to see our exclusive Flickr photos of the village's demolition and the wounding of residents with rubber or "sponge-tipped" bullets fired by the Israel riot police and beatings with batons.

Update 1/17/11 - 10 pm Israel Time: Haia Noach, executive director of the Negev Coexistence Forum for Civil Equality - the leading Israeli advocate for human rights for Israel's Bedouin and winner of the Israel Association for Civil Rights Emil Grunzweig Prize - and 10 other Israeli human rights activists have been arrested in Al-Arakib for rebuilding the village. Haia's car was also confiscated. Mumtaz Khateeb, Amoz Gvirtz, Tel Aviv U Prof. Gadi Algazi, and activists of the Negev Coexistence Forum, the Recognition Forum and local residents have been arrested and are being held at the police station in Rahat. Efforts are underway to obtain their release from the Beer Sheva Court. (More updates from 1/17 below).

5 am EST Sunday 1/16/11: I have learnt that the situation has now deteriorated further with the police resorting to the use of tear gas [and rubber bullets for the first time - Ed.] against the residents. I understand that at least four people have been so badly affected they have hospitalised and a further person is receiving treatment for a broken arm.

[Five have been hospitalized at Soroka Hospital in Beer Sheva, and 3 people have been arrested. Ynet's report states that pepper spray was used rather than tear gas, and that the bullets fired at the residents were paint balls. But if the injuries to the residents were caused by paint balls, where's the paint? The cannisters that were fired, which are pictured up close at our Flickr photo set, do not appear to be pepper spray - but we are researching this and will provide more info here once available. - Ed.]

4 am EST: Just before 9am this morning (Israel time), the bulldozers and police force returned to Al Arakib to once again level it to the ground. This time, however, in order to cleanse the land of any indication that people once lived there, everything is being removed and dumped in dumpsters. No building materials or personal items will remain for the residents to salvage and rebuild the village. Again there was no opportunity for the families to rescue their belongings before the demolition started. Additionally it is thought that a few of the men were away in Rahat in mourning for a recent death in the community.

The bulldozers and lorries are still in Al Arakib as I send this email as there are many hours of work ahead of them to remove everything demolished.

The area is being flattened by bulldozers and heavy earth moving machinery to remove any trace of the village and a new road for JNF's forestation activists is being prepared. We suspect that these measures are being taken now ahead of Tu B'shvat on Thursday when many JNF volunteers are expected to be in the area planting trees. Removing the mangled mess makes certain that no awkward questions will be asked by JNF volunteers or dampen their festivities.

The police did not allow Haia Noach (executive director of the Negev Coexistence Forum for Civil Equality) to enter village this morning; however, she has met with the residents. She reported to me that she has never seen the women as traumatised as they are this morning. The only blessing is that the children had already left for school for the day so did not have to witness, yet again, the complete destruction of their homes.

JNF-KKL has dismantled the bulldozer camp near the GOD TV forest and now has built a new bulldozer camp just in front of Al Arakib (where the government deep ploughed the residents' crops last year in Feb). JNF-KKL is even working today while all this is happening in Al Arakib.

[JNF's new camp is being built next to the Al Arakib cemetery to house heavy vehicles, storage spaces and accommodations for their people, according to the Regional Council for Unrecognized Bedouin Villlages in the Negev.]

"The Israeli police claim they were taking measures to charge the residents of Al-Araqib with demolition expenses, which were incurred by the Israeli government and estimated at millions of Israeli shekels. The police added it was cooperating with the southern district prosecutor and planned to take civil action against the residents." (Israel razes Bedouin village for ninth time, Arab News)

"Knesset Member Talab El-Sana (United Arab List-Ta'al) was among those who tried to prevent the demolition. 'This is fascist-Nazi policy,' he said. 'The state is pushing its Bedouin citizens to the point where they may launch a popular intifada, which will have severe results.'"
"Bedouin Village Razed Again; Residents: Fascist State," Ynet, 1/16/11
Hebrew version: "Bedouin Village Razed Again: Fascist-Nazi Policy"
(A more accurate translation of the Hebrew headline, and the statement quoted in the article from the Bedouin Knesset Member who was at Al Arakib demonstrating against the demolition.)

Update 1/17/11 10 am Israel time from Karen Douglas of the Negev Coexistence Forum:

This morning saw the bulldozers and trucks return to Al Arakib to not only continue removing the debris from yesterday's demolitions but to flatten the temporary structures that the residents had erected quickly last night to protect the families from the wintry desert conditions. It was necessary to purchase all the materials as nothing was salvageable from the piles of debris which had not yet been cleared away.

All of the residents and activists who arrived this morning to support the residents, including NCF Director Haia Noach, have been restricted to Al Arakib's cemetery. At present police are preventing anyone from leaving this location and identification documents have been confiscated.

The road into Al Arakib has also been closed to prevent further supporters from arriving throughout the day. Dr. Awad Abu-Farikh who was arrested yesterday has now been released and we are still trying to find out about the other two residents who were arrested.

There were in fact about 20 structures demolished, all temporary structures made from light wood and tin sheet. JNF workers were not directly involved in the demolition but were in the area adjacent to the village doing massive work to prepare the ground for planting on Tu Bishvat on Thursday. Police were in full riot gear and were not identified with names. When Haia Noach asked one officer for his name, he replied '101'.

In addition to eyewitness testimony from Bedouin at Al Arakib reported to Haia Noach and Karen Douglas at the Negev Coexistence Forum, and sources we have linked to above, additional sources for this report:

Posted by Jewish Alliance for Change at 4:00 PM