Where are the Jewish Greens?, by Devorah Brous, Tikkun 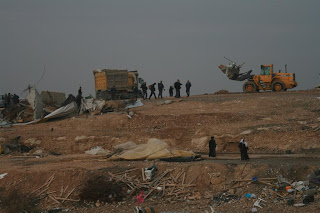 Jewish environmentalists have elevated a minor symbolic mystical ritual of holding a Tu B'Shvat Seder into an annual and provocative communal celebration. This week is Tu B'Shvat - the Jewish Earth Day that is traditionally marked by planting trees and eating their fruits in the dead of winter to symbolize that lifeforce will again rise to bear fruits in what appears dormant.

In advance of the Jewish National Fund (JNF) tree planting activities this Tu B'Shvat, the Bedouin village of Al Arakib was once again demolished. For the ninth time. This time, rubber bullets and batons were used by Israeli police in riot gear. Leading Bedouin and civil rights activists, Jewish professors and village residents were arrested and hospitalized during protests over the past few days in the escalating yet still largely unseen struggle in the Negev. Bedouin are now to be fined the costs incurred during the demolitions. Where is the outrage among Jewish Greens?

While planting a JNF tree may seem innocuous, make no mistake: it is a deeply political act. For every Jew who has ever planted a tree in Israel, whether you framed or tossed the certificate, or whether there's a gold plaque memorializing your family name, afforestation is done in our collective name. When we plant Bar/Bat Mitzvah trees, or when Evangelical Zionist Christians fund a JNF forest that displaces an entire Bedouin village, we are taking a position in the Jewish/Arab conflict. So although you may see tree planting as a way to reduce your carbon footprint and a symbolic yet tangible way to support the State of Israel, you may not be aware of the politics behind where your tree is planted. Each tree planted in the Negev is intended to make settlement more attractive for the 250,000 Jews the JNF is subsidizing to “redeem” desert lands for Jewish control.

The continuous rebuilding of Al Arakib after each demolition is the symbolic face of Negev Bedouin resistance. The Israeli government has used excessive violence to coerce villagers to accept meager compensation and to bulldoze the disputed Bedouin land for the JNF’s new “God-TV Forest” -- yet the Bedouin struggle remains non-violent. The Bedouin remain more determined than ever to hold steadfast to their lands. Put in the same position, I would do exactly the same.

Environmentalism in Israel cries out for re-branding. It seems apt to inaugurate a new term to demystify the celebrated image of “Greens” who claim to champion the care-taking of Israel’s resources. These “Greens” pay lip service to a tokenized Arab minority and remain silent in the face of outrageous environmental destruction to Arab villages, homes, and resources.

ECOnoclasts - eco-minded iconoclasts - would revolutionize status quo “green” movements by advancing an equitable stewardship of public resources with balance and sustainability for all people, regardless of demographics or zoning policies. ECOnoclasts would challenge the prevailing elite brand of environmental ideology in Israel that preserves or develops in order to further the hegemony of dominant groups. Through word and deed, ECOnoclasts would challenge discriminatory control over natural resources for public possession or private ownership. The ECOnoclast would expose the conditional and especially deceptive environmentalism that protests, researches or advocates using inclusive language to define its objectives, like, “the forest is a shared national symbol.”

ECOnoclasts would analyze and connect the dots on tactics of omission and commission - such as tree-planting to expand State boundaries; impose title; or confiscate land. ECOnoclasts would expose when “greens” omit controversial environmental issues in an effort to remain bipartisan, and, of course, funded. ECOnoclasts would eviscerate “greens” who support the agro-tech achievements of Negev greenhouses on Jewish farms that exploit Israel’s dwindling water reserve to export water-intensive Grade A produce - since their Arab neighbors are denied access to drinking water unless they relinquish their land claims and move to Arab-only urban ghettos built by the State. This would unmask the Green dimension of the Jewish/Arab conflict.

Until now, there is no forum for the ECOnoclast to be heard. It's much more palatable to discuss sourcing our fruits locally during our Tu B’Shvat seders than how our tree planting holiday has escaped all irony by becoming an occasion for bulldozing non-Jewish homes and expelling people to plant forests. Perhaps most disturbing is how rare it is to conduct an unfiltered and honest conversation about tree planting in the “organized” Jewish world, since the JNF funds most Jewish environmental organizations poised to speak out.

Whether you take a position on Bedouin rights and State wrongs; whether you think that urbanization equals modernization; whether you believe the JNF should plant to “redeem” inhabited Arab lands regardless of their standing in Israeli courts; we should be able to engage in open discourse without burying it under Tu B’Shvat trees, or the rubble of demolished Arab homes.

While Israeli politicians take strategic measures to plant over Al Arakib village and urbanize Bedouin against their will, let this Tu B’Shvat remind us that what appears dormant will once again rise with sap and bear fruit. Help buttress Negev NGO’s that work to bear the fruits of cooperation in the non-violent struggle to recognize Al Arakib. Ultimately, this will yield more fruit than any forest.

Devorah Brous lived in Israel and worked with Bedouin for 15 years. She is the founder of BUSTAN, a Jewish/Bedouin civil rights and environmental justice NGO in the Negev, where she served as Executive Director for 9 years. She currently serves as co-director of the Campaign for Bedouin-Jewish Justice in Israel, a Project of Rabbis for Human Rights-North America and the Jewish Alliance for Change. She holds two Masters degrees in Israel Studies and Development Studies and now lives in Los Angeles.
Photo Credit: Negev Coexistence Forum for Civil Equality
Posted by Jewish Alliance for Change at 11:54 PM