Violence in Bil'in and oppression of Negev Bedouin in Israel's unrecognized villages, by Rachel Metz 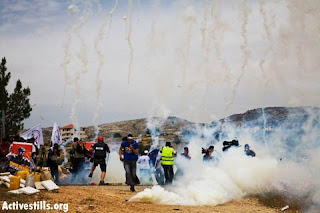 At the dawn of this new Gregorian year and decade, Israel once again made the news for killing a demonstrator in the village of Bil'in. Bil'in lies on the “seam line,” the area outside the Green Line but within the path of the separation barrier Israel has unilaterally built to prevent terrorists from coming into Israel proper from the West Bank. Because the path cuts into the West Bank itself, many Palestinians complain that it de facto appropriates their land.

In 2007, Israel’s Supreme Court agreed with such complaints by the villagers in Bil'in and ordered that the barrier’s route should be moved. The IDF has yet to implement the decision, and when demonstrators literally take matters into their own hands by trying to dismantle the barrier, the IDF regularly fires tear gas at them. This has resulted in several fatalities, as the IDF also violates its own stated policy that the gas canisters should not be fired at close range and uses one of the more dangerous varieties of tear gas.

At its root, the ongoing violence in Bil'in is part of the same phenomenon oppressing the residents of Israel’s unrecognized Bedouin villages. The IDF’s actions in Bil'in are consistent with the longstanding policy of seeking to squeeze out Arab residents so as to enable Jewish development on the maximum land possible (it’s no coincidence that the Bedouin live on only two percent of the northern Negev despite comprising twenty-five percent of the population). Just last month, in response to people pointing out the racism of a bill that would allow small communities to discriminate in order to, “preserve their social and cultural character,” the Knesset amended the bill to”only” apply to the Negev and the Galilee. Israel presents itself as a Jewish, democratic state, but its actions show it be functioning only as a state for Jews.

When Arabs respond to Israel’s discriminatory zoning policies by building without permits, they face frequent home demolitions. Just in the latter half of December, hundreds of people in Lod, As-Sadir, and al-Araqib were left without a roof over their heads by Israeli government bulldozers. The last name is familiar to regular readers of Bedouin Jewish Justice – the village has been razed nine times in the not-even-six-months since the JNF announced plans for the area. In East Jerusalem, the rate of home demolitions has gotten so high – it increased 45% over the past year – that the U.N. humanitarian coordinator has expressed concern.

Even those Arab residents whose land claims the state does recognize may find obstacles placed in the path to living on their own land – one man has been fighting red tape for twelve years.

With instruments of the state leveraged against them (at times, in the form of a bulldozer, quite literally), Arab citizens of Israel are second class citizens. This situation should be anathema to anyone whose sense of Jewishness comes with a sense that “Never Again” should apply not just to Jews, or whose Jewish values say that pikuach nefesh, preservation of life, applies to all people. We must challenge Israel to act democratically and consistently with Jewish values.
Posted by Jewish Alliance for Change at 8:39 PM