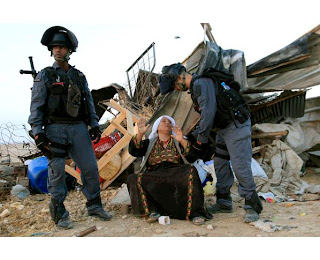 To view the article in PDF as it appears in the Jerusalem Report, please click here.

In late November, for the seventh time in the last five months, Israeli authorities razed the “unrecognized” Bedouin village of Al-Arakib in the Negev, evicting 300 Israeli citizens from their homes. And for the seventh time the residents began to rebuild in a Sisyphean struggle with the Jewish state.

Even before the desert dust had settled, two major Jewish National Fund (JNF) projects were almost completed in the immediate vicinity of the village. Funded by Evangelical Christian Zionists from the “Land of Promise” and “GOD-TV” “to invite the Second Coming of Christ,” half of a new one million tree "GOD-TV Forest" already extends in a vast swath near Al-Arakib. And the Israel Antiquities Authority auspiciously uncovered the ruins of a 6th century Byzantine church at the entrance to the brand new JNF settlement of Givot Bar next to Al-Arakib.

Both JNF projects highlight a familiar cycle: Arab land is expropriated, cleared and re-zoned for State use to prevent Arabs from returning. Despite national master plans designed to keep development accountable, there is no effective process in place that enables full democratic participation of all interested stakeholders in decisions on future building and planting schemes in the Negev.

For example, to the surprise and chagrin of watchdogs on the ground, Bedouin wheat and lentil fields were uprooted by the State over a five-year period to establish Givot Bar. Then the GOD-TV forest sprouted out of nowhere and now church excavations have begun without any public scrutiny. The Israel Lands Administration offered Al Arakib villagers a very low rate to rent ‘agricultural land’ from the State. Since development on such land is prohibited, Bedouin would be legally barred from building homes there, so they refused the offer. Beyond pragmatic concerns, it’s a matter of principle: Why should they rent what they have long tended, grazed and believe they already own?

Most people are largely unaware of the non-violent struggle waged by some 74,000 Bedouin citizens of Israel’s “unrecognized villages.” These villagers are resisting Israel's attempts to relocate them in government-built and Arab-only “recognized cities” where roughly 96,000 landless Bedouin have moved. Though these cities boast better government services than the unrecognized villages, they suffer from years of state underfunding and consistently report the country's highest rates of unemployment and crime. Furthermore, they have proven not only inhospitable but destructive to an ancient Bedouin culture of dry lands farming and animal husbandry.

Bedouin in the “unrecognized villages” argue their land tenure cases vociferously in court and resist pressure to sign statements barring them from their lands. They choose to remain in tin shanties or cement block homes without electricity, sewage systems or running water, with one clear aim: to hold onto their village grounds. They challenge the discriminatory institutional, zoning and legal mechanisms used to deny building permits and keep Arab villages outside the state's planning frameworks.

Appeals to have their land rights recognized are doomed from the outset. Since the Knesset has passed laws enabling Bedouin acreage to be declared "state land," land claims are systematically denied under jurisprudence with a built-in bias. Deemed "illegal squatters" lacking land title, Bedouin are seen as "serial invaders" who "infiltrate and seize state land." Most recently, Israel’s parliament approved on preliminary reading a bill proposed by Avigdor Lieberman's Yisrael Beitenu party that would require owners of “illegal construction” to pay for the demolition of their homes. Far from serving justice, the law has become the hand-maiden of Jewish ultra-nationalism.

Despite fierce criticism by environmentalists and civil rights advocates, the JNF is working to entice an additional 250,000 Jews to settle in newly built desert neighborhoods like Givot Bar. Their ambitious “Blueprint Negev” plan is bankrolled by private American charitable support, unleashing a “new Zionism” that heeds David Ben Gurion’s clarion call to settle the Negev.

Such development is sold as “progress.” Yet many donors remain unaware that planting Bar and Bat Mitzvah trees in the “barren desert” is not mere tzedekah (charity), but a political act that deepens the Jewish/Arab conflict over land and resources. What could have been a noble pursuit is, in actual fact, discriminatory development designed to corral Bedouin into ever more constricted tracts of land in order to reclaim Arab-held territory for Jewish or Evangelical Zionist use.

JNF claims that tree planting is a shared national symbol that benefits Jews and Arabs. But it is also an invisible agent of conquest. Within no time, trees will effectively conceal evidence of the former inhabitants of Al-Arakib and the Negev Arab land rights struggle will remain unseen.

The first step in truly transforming the Blueprint of the Negev is to stop the nearly 200 Bedouin home demolitions a year, which the Netanyahu government has promised to triple. The second step requires seeing the forest through the trees. The JNF and government bodies must work with local communities to develop Israel’s Negev in a way that is equitable, sustainable and culturally appropriate for the region’s diverse inhabitants, including the Negev Bedouin, Israel’s most disenfranchised minority.

Devorah Brous, the founder of "Bustan," a Jewish/Bedouin environmental justice NGO in the Negev, is now based in Los Angeles, where she serves as co-director of the Campaign for Bedouin-Jewish Justice in Israel, a project of Rabbis for Human Rights-North America and the Jewish Alliance for Change (www.bedouinjewishjustice.blogspot.com).
Posted by Jewish Alliance for Change at 5:47 PM