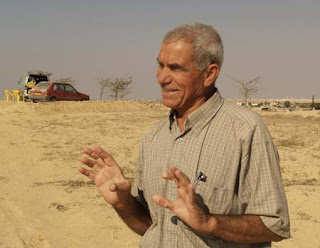 Nuri al-Okbi, head of the Association for Protection of the Rights Bedouins in Israel and also active for the rights of the Arab residents of Lod, many of whom were originally Negev Bedouins, was sentenced to seven months imprisonment on charges of "running a business without a license".

The business in question is a garage which al-Okbi has been maintaining since 1964 in Lod. Over the years, the Municipality of Lod's policy has undergone unpredictable changes, with the garage getting a permit in some years and being denied it in others.

Following the verdict, al-Okbi said: "I have become the target of politically-motivated discrimination and intimidation, with the intention of gagging me, putting an end to my speaking out against the municipality's policies - for example, the demolition of seven homes of Arab residents about a week ago. The Police, Fire Department, the Ministry of Interior and Ministry of the Environment all certified that my garage conformed to all regulations.

Nevertheless, the municipality had deprived me of a business license, while granting one to people in my neighborhood whose businesses were started after my garage. I am sure that if I had been ready to toe the line dictated by the municipality, I would have had no problem in obtaining a license. Their real problem is not my garage, but my public activity."

Following the harsh verdict, al-Okbi – who is 68 years old and suffers from a heart condition - felt ill and was hospitalized at the Assaf Harofeh Hospital, where he is hospitalized under police supervision and his hands and feet handcuffed to the bed. The police also prevented al-Okbi's son, who came to the hospital, from talking to him.

Originally, the court seemed inclined to let al-Okbi perform community service in lieu of imprisonment, and in fact he already made arrangements with a Ramla soup kitchen which was interested in having him. At the last moment, however, Judge Zachariya Yemini of the Ramla Magistrate's Court decided to act severely and imposed a seven months' term - rather than six months, the maximum term which under Israeli law can be commuted to community service.

In his verdict, the judge, referring to his human rights work specifically noted that "treating the defendant leniently would constitute a negative message to the public, and especially to the Bedouin" – i.e. his activism on behalf of the Bedouin community was the specific and explicit reason why he was treated severely.

Adv. Avi Dubin, al-Okbi's lawyer, asked the court to delay implementation so as to facilitate the lodging of an appeal, but the judge conditioned such a delay upon the immediate depositing of thirty thousand shekels at the court's treasury, a sum which al-Okbi could not raise – whereupon he was immediately taken off to imprisonment.

In addition to the prison term, the court imposed on al-Okbi a fine amounting to forty thousand shekels, failure to pay which would lead to his undergoing four hundred additional days in prison. Adv. Dubin filed an appeal against this verdict. "I hope that in the deliberations of a higher court, Israel's judicial system would show more consideration to Nuri al-Okbi. There is no justification for the severe treatment meted to him" says Adam Keller, spokesperson of Gush Shalom, who has long followed Nuri al-Okbi's struggle for the rights of the Negev Bedouin community.

http://www.kibush.co.il/show_file.asp?num=44306
http://english.pnn.ps/index.php?option=com_content&task=view&id=9355&Itemid=63
Posted by Jewish Alliance for Change at 1:27 AM