Tree Planting Near Omer: Environmentalism or Inequality?, by Rachel Metz 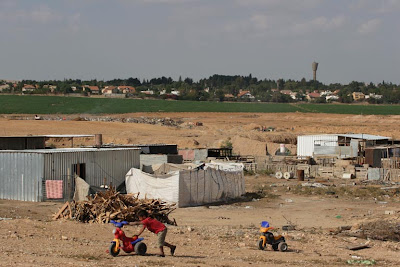 When seeing the way in which the mainstream Jewish press writes about issues that affect the Negev Bedouin, I sometimes get the impression that the authors are like the fourth child at Passover who does not even know how to ask a question. Because unrecognized villages are not on the map they are treated as if they do not exist. But when I read this article about a Tu B’Shvat tree planting in the vicinity of the town of Omer, my immediate question was, “Where near Omer?”

This affluent community near Beer Sheva is bordered by unrecognized villages, which begs the question of whether the land on which trees are being planted is anybody’s home. With that in mind, the quote in the article from a (Jewish) tree planter that, “'In a place where we plant trees, people live and the State prevails'” becomes an ominous declaration of the lesser rights thought to be due Arab citizens of Israel rather than the optimistic, pro-environmentalist message it might initially seem to be.
Posted by Jewish Alliance for Change at 10:12 PM