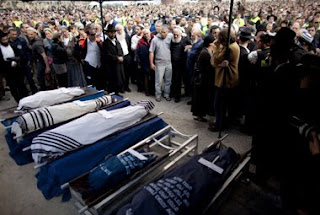 New York, N.Y. -- The Jewish Alliance for Change (JAFC) unequivocally condemns the horrific massacre of a family of five, including three children, at the West Bank settlement of Itamar. “There is absolutely no moral or legal justification for the murder of innocent men, women and children,” said JAFC Executive Director Doni Remba. “Even if settlements like Itamar violate international law, murderous attacks against civilians living in such settlements are crimes against humanity.”

As every major human rights group, including Human Rights Watch, Amnesty International and B’Tselem, has stressed for the last decade, deliberate attacks on Israeli civilians by Palestinians are “a flagrant breach of international humanitarian law.” “Targeting and deliberately killing non-combatants, including children and infants, is terrorism by any definition of the term, no matter what cause the terror claims to serve,” added Mr. Remba. “And we reject the argument that settlements and the occupation legitimize terrorism. Decent human beings reject such methods of warfare in all circumstances. Attacks directed against innocent civilians are always terrorism, and terrorism is always a heinous moral wrong.”

The rabbis of the Talmud taught that “the more justice, the more peace.” “Even a just solution to the Israeli-Palestinian conflict will not end all violence against Israel,” said Mr. Remba. “But it will significantly weaken Arab and Muslim extremists and reduce their ability to recruit and motivate others to engage in acts of terror against Israel.”

The Jewish Alliance for Change urges Israeli and Palestinian leaders not only to redouble their efforts to reach a just peace, but to recognize, through word and deed, the centrality of respect for the human rights of all people in Israel, the West Bank and Gaza to winning the battle against terrorism and securing a lasting peace. Peace without human rights for Israelis and Palestinians cannot stand. Peace without an abiding commitment to the democratic values of equality and human rights on which Israel’s alliance with the US and the West rests will not last.

The Jewish Alliance for Change co-sponsors with Rabbis for Human Rights-North America the Campaign for Bedouin-Jewish Justice in Israel. JAFC is a pro-Israel nonprofit organization that works to foster the American Jewish contribution to a flourishing global Jewish community, an America and a Jewish democratic Israel that respect the dignity of every citizen.

For the last decade, as leaders of the Jewish Alliance for Change, and before that of other pro-Israel Jewish organizations devoted to peace and justice between Arabs and Israelis, we have spoken out forcefully against those who have sought to justify Palestinian terrorism. Starting with the outbreak of the Second Palestinian intifada in 2001, we were among the first, and for many years consistently the most vocal, to call to account the hypocrisy of those who criticized Israeli settlement and occupation policies but failed to condemn as war crimes Palestinian suicide bombings and other murderous attacks against Israeli civilians. (See "Mideast Forgiveness," Chicago Tribune, August 2, 2001; "Trib vs. Tribe," Chicago Reader, March 14, 2002; “Tribune Terrorism: Why Chicago Jews Are Mad as Hell,” March 7, 2002; and “Response to Chicago Tribune Public Editor Don Wycliff on Terrorism,” March 21, 2002.)

We are in complete agreement with this statement released by B’Tselem on March 12, 2011, “strongly condemning the killing of five Israeli civilians in Itamar”:

“Over the past ten years, Palestinian terror attacks perpetrated in Israel and in the Occupied Territories have killed hundreds and injured thousands of Israeli civilians, among them men, women, and children. Attacks aimed at civilians are immoral, inhuman, and illegal. Intentional killing of civilians is a grave breach of international humanitarian law and is considered a war crime that can never be justified, whatever the circumstances.Palestinian organizations seek to justify attacks on Israeli civilians by claiming the attacks are carried out in their struggle against the Israeli occupation. This argument does not justify the attacks and undermines the fundamental principle of international humanitarian law, according to which civilians must remain outside the sphere of hostilities, and therefore a distinction must be made between combatants and civilians and attacks directed at civilians are prohibited.

"These rules are part of international customary law and apply to every state, organization, and person. Some persons speaking on behalf of Palestinians argue that, inasmuch as the settlements are illegal and many settlers belong to Israel's security forces, it is permissible to attack settlers. This argument is groundless: the illegality of the settlements does not affect the civilian status of their residents in the slightest. The settler population is civilian and as such is entitled to all the protections that international law provides to civilians. The use that Israeli security forces make of lands on which settlements were built, or the fact that some settlers are members of Israel's security forces, does not alter the civilian status of the residents who are not members of the security forces, and certainly does not legitimize attacks on them.

"B'Tselem strongly objects to attempts to justify these actions by means of misleading arguments based on a distorted interpretation of international law and demands that the Palestinian Authority do everything within its ability to prevent such attacks.”

For statements by some of our friends and allies, please see:

Meretz USA outraged by the murders in Itamar

Israeli blogger/journalist Dimi Reider rounds up the statements of various other Israeli human rights groups in "The activist Left must condemn the murder of the Itamar family."
Posted by Jewish Alliance for Change at 9:38 PM