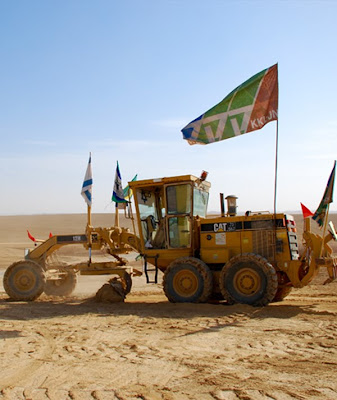 The Israeli government and the Jewish National Fund demolished the little that remains of the Bedouin village of El Araqib on Monday, as they work to permanently change facts on the ground, erasing the village’s very existence and history.

Four huts being used for community meetings in the village of El Araqib were destroyed by the Israeli government, Israeli special police and the Jewish National Fund on Monday (March 7). This is the 21st demolition of the village since July 2010.

The Bedouin villagers have stopped rebuilding their homes and tents and are now living in makeshift structures in the village cemetery, adjacent to the property they once used as home. It seems that four tents are still too many, because Israeli forces joined by JNF bulldozers entered the village early Monday morning, destroyed the structures completely, and continued working on the land, which will be used for the planting of a “peace forest.”

When the demolitions first began, the Israeli authorities would destroy the homes of El Araqib, and residents and volunteers would immediately rebuild. This pattern was repeated numerous times.

However, most recently, the authorities are not only destroying homes, but also removing the building material remains so they cannot be reconstructed. They are leaving nothing behind that may evidence the site of their future forest was once was a Bedouin village for the better part of a century.

The JNF is not only planting trees at present, they are turning all of the soil in the area so that the land appears to be only agricultural.

Many residents of El Araqib are now sleeping in the nearby Bedouin city of Rahat, and returning to the village for the weekends.

Most recently, Israel’s State Attorney’s Office announced they are currently preparing a legal petition for more than NIS 1 million against El Araqib, which will require that residents cover the costs incurred to evict them and demolish their village.

The many demolitions of El Araqib are part of the aggressive attempts of the Jewish National Fund (JNF) and Israel Land Authority (ILA) attempt to claim the historic Bedouin land, erase the evidence of their century of habitation, and use it for forestation and future Jewish settlement.

During this process, thousands of fruit trees cultivated by the residents of El Araqib have been uprooted by the demolitions.

The El Araqib Committee, the El Araqib Popular Committee and the Recognition Forum, amongst others, are initiating a day of solidarity and replanting in El Araqib on Saturday 12 March. Palestinian, Israeli and international activists will be joining residents of the village to replant these uprooted fruit trees as a symbol and permanent evidence of El Araqib and the residents returning to their land.

The Recognition Forum, a coalition of groups working for official Israeli recognition of the Bedouin villages in the Naqab (Negev), is soliciting donations for the purchase of these olive tree saplings, each of which costs NIS 25. Contributions may be sent to Recognition Forum, POB 1335, Kfar Saba, 44113.

Organised transportation from Tel Aviv and Jerusalem is being organized, additional information at: aic (at) alt-info (dot) org.

Reposted (with edits) from The Alternative Information Center
Posted by Jewish Alliance for Change at 2:38 AM