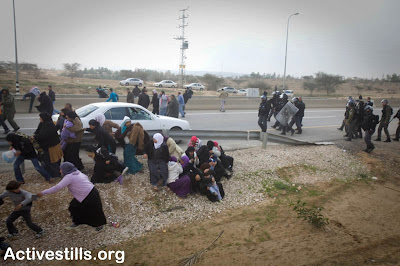 Christian network `God TV` announces a planting project in cooperation with the Jewish National Fund. Villagers claim it is an effort to remove them.

`The Lord gave me instructions: `prepare the ground for the return of my children’. I asked: ‘Father, how do we do it?’ And the Lord answered ’plant a million trees.’ I believe this is what I heard, the spirit of God and I share this mission with you.” Rory Alec’s voice is excited and laden with pathos when he describes what led him to initiate the largest tree planting project, spearheaded by the `God TV` network, throughout Israel.

Alec is the driving force behind the thriving Evangelical network. The network carries out tree planting in cooperation with the Israeli branch of the Jewish National Fund and its US counterpart. The afforestation project is part of a broad plan encompassing large tracts of the northern Negev. It is not, strictly speaking, afforestation in the usual sense of the word, but more like “savannahfication” – the planting of trees and shrubs that would create the appearance of a savannah. The benefits of doing it this way, according to the JNF, include soil improvement and the prevention of erosion. However, the Israel Lands Administration and Agriculture Minister Shalom Simhon, have admitted that one of the aims of the project is the taking possession of the land - that is, asserting ownership in order to keep the Bedouin out.

Some of the areas included in the project are near the Bedouin village of Al- Arakib, which was destroyed yesterday for the 16th time in eight months [Actually six and a half months–tr.] Israel Lands Administration (ILA) inspectors accompanied by police units came to the village to continue the forestation work, after the Beer Sheva Court ruled that work may continue taking place. There were confrontations when the residents started hurling stones at them and the police responded by firing tear gas. Six of the villagers - four women and two children - were injured and were evacuated to Soroka Hospital in Beersheba. Three people were arrested. Haaretz has learnt that the village activists intend to stay over the weekend in situ to rebuild the encampments that were destroyed.

The JNF and the Israel Lands Administration insist that the forest, dubbed `God TV Forest` is not being planted on the ruins of the village. But the proximity to the village’s land has prompted a torrent of rage from the residents and the left-wing activists who have been supporting them. The Bedouins argue that the afforestation project in the northern Negev aims to goad them away from what they perceive as their traditional land. `The JNF, the most Jewish of Jewish bodies, of which my parents my grandparents were proud partners, has changed its skin and now collaborates with the most fundamentalist organisation for which we are the Messiah’s donkey,` says Professor Oren Yiftachel. The professor, a resident of the Negev and chairperson of B’Tselem, has been assisting the residents of Al - Arakib in their struggle with the state authorities against their homes’ demolitions.

Channel `God TV` was established in England in 1995 and was first of its type in Europe. Since then, “by the grace of God through miracles,` as its founders put it, the channel has expanded its activities to become an empire. “God TV transmits to almost every country around the globe with operations in the US, Europe, China, India, Australia and Africa. The channel’s 24-hours a day programs feature thunderous preachers who beat the foreheads of the faithful, wailing worshipers groups, animated calls for sexual purity among the young and kitschy missionary songs. The religious content is nicely packaged with rhythms and clips reminiscent of the source of inspiration - music channel MTV. The channel leads many social activities becoming a partner in various humanitarian ventures, particularly in Africa. In 2002, the channel revolutionised its image when it moved its offices and main base to Jerusalem, and now it brands itself as an enthusiastic supporter of Israel.

The planting project is one of its flagship ventures, the stated purpose of which is to prepare the country for the return of `Lord of lords, King of Kings,` as specified on its dedicated website. The site provides a facility to contribute to tree planting in the amount of US$25 or 20 Euros (about 90 to 100 shekels.) Incidentally it is possible to have the same tree planted by contributing a mere 32 shekels to the JNF. Considering the avowed desire to plant over a million trees, the discrepancy in price provides a measure of the financial clout of the organisation which provides it with a sound base.

Until about a fortnight ago a large outdoor board stood not far from Al-Arakib announcing the joint project of the TV channel and the JNF. The villagers see afforestation activities as part and parcel of the campaign against them. “These trees are the soldiers who came to occupy our land. These are political trees,” said Awad Abu Farih, a spokesperson for the residents of Al-Arakib. In contrast to the JNF and the ILA Administration, the villagers do not see any difference between the planting of the forest and the work that is being carried at the site of the village’s ruins. “These are exactly the same operations, they think that if there were trees here, then there would be no Bedouins here,` added Abu Farih.

God’s TV are aware of the criticism and are wary of it. The channel placed a note on its website stating: “God TV is in no way involved in any ongoing legal proceedings between the Israeli Government and the village of Al-Arakib. God TV has committed to sponsor one million trees, to be planted through the efforts of the Jewish National Fund, throughout Israel in an effort to restore the desert places to the lush green land it once was, preparing the Holy Land for the return of the King of Kings. God TV is not responsible for, or involved in, the decision as to the specific places trees are planted across the country.”

The JNF rejects the Bedouin claims, stating that the JNF is diligent in ensuring that no planting takes place anywhere outside state land. It says that the practice is adhered to in Al-Arakib. They stress that they cannot reject donations on the grounds of the identity of the donors. They add that any planting financed by donation takes place only in areas designated for the purpose in the national afforestation master plan. Therefore, the goal is afforestation and not the removal of the Bedouin. The JNF spokesperson said that 'The JNF plants trees all over the state of Israel, which is its role. However, any requests for planting are only acted upon once the JNF has verified that the proposed area is indeed legally state land. '

The Israel Lands Administration said that the JNF is only carrying out the work in Al-Arakib as a subcontractor, and that it was selected for the purpose because of its expertise in forestry work. As we go to press no response has been received from God’s TV.

By Nir Hasson, Haaretz, 11.2.11
Jackie Khoury and Yanir Yagna also contributed to this report
Reprinted from Occupation Magazine
Posted by Jewish Alliance for Change at 8:03 PM