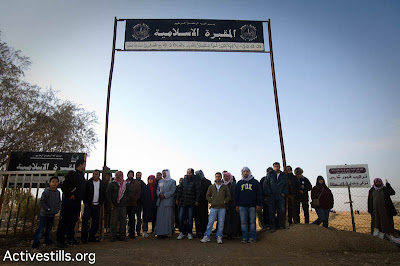 After Israel Land Administration and Jewish National Fund bulldozers destroyed the dwellings in the Negev Bedouin village of Al-Arakib today for the 17th time, a JNF bulldozer approached the gate of the cemetery attempting to run it down. This was too much for the villagers, who are sitting in their community's cemetery, watching as their village is once more demolished.

As the bulldozer approached the gate, people went to stop it with their bare hands. Several are injured, including children. They are being evacuated at this moment by ambulances to Soroka Hospital in Beer Sheva. Police are also firing rubber and paint bullets at the village residents in the cemetery.

6:30 am EST update: Israel Radio Reshet Bet reports that at least 5 Bedouin residents and a photography student have been injured; two of the injured have been evacuated by ambulance to Soroka Hospital; the others say they are afraid to be taken to the hospital for fear that they will be arrested (and barred from returning to their village) after being treated.

4 am EST: About 40 Yassam riot police are present in the village. As we had had a few days reprieve since the last demolition, there were about 15 tents that had been built in the village since Thursday. The ILA bulldozers are now tearing these down and the JNF bulldozers are continuing their work to prepare the ground and shoving the ruined structures aside. All of the residents (including the children who have not yet left for school) are holed up in the cemetery.

(This from various reports in Hebrew & English from our friends in the Negev: Negev Coexistence Forum for Civil Equality; Yeela Ra'anan of Shatil, and the Regional Council of Unrecognized Villages; Gadi Algazi/Tarabut, and Israel Radio Reshet Bet. Photo above shows cemetery gate on Jan. 10, 2011.)
Posted by Jewish Alliance for Change at 3:06 AM