In Israel, the revolution has already begun, by Bradley Burston, Ha'aretz 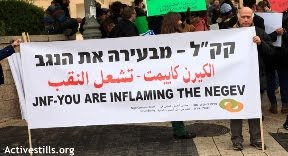 Ha'aretz columnist Bradley Burston sees our struggle for human rights for the Bedouin of Al-Arakib as one of the signs of the emerging democratic revolution in Israel.

People often ask why, at a time when revolutionary fervor has seized nation after nation here in the Middle East, no revolt has yet begun in my country.

Actually, it has. Right under the government's nose.

From the outside, it may well appear that nothing has changed: a small but strategic principality which has been ruled for decades by a self-declared aristocracy, few in number, fierce in influence, fundamentalist in outlook, increasingly non-democratic in governance.

Although technically and by blood one of the princes, the nominal prime minister is, in essence, a figurehead. Under pressure from the West to extend self-determination to minority regions, he knows that were he to agree to renounce sovereignty over these areas, he would be risking a bullet to his back.

For a while, the prime minister speaks of reforms, of a U.S.-backed vision of independence for the minority regions. But only for a while. Mindful of the well-armed 4 percent of the population which so often calls the shots for the other 96, he even risks the close relationship with the United States for the sake of the aristocracy, which lives in army-guarded estates away from view, beyond the borders of the general population.

The reforms fade as he speaks of the dark designs of regional foes, while his guileful chief coalition partner, the burly, corruption-shadowed grand vizier, a rival for the political affection of the aristocracy, exploits long-simmering hatreds to push for a broad range of curbs on democratic freedoms.

Yes, to the outside world, the button-down façade of stability seems assured. The country's general population supports major reforms, but has been traumatized into paralysis by years of bloodshed and a sclerotic political system dominated by corrupt, theocratic and rigidly conservative interest groups.

Outside of the established political mechanisms, however, a revolution is underway. Here, of all places. In the modern principality of the Jewish People. In Israel.

Over the years, the settlement aristocracy – the plaid-flannel power behind the throne - has aged, losing political steam and internal direction, as its own youth have begun to question its ideology of divine right to land and rule.

Here, now, on this side of the recognized border, a potent opposition is emerging, young, largely unknown, social network-savvy.

This revolution, like that of the settlers decades ago, has the potential of transforming both Israel and Judaism as a whole.

That is why the anti-compromise, pro-settlement right correctly sees NGOs, human rights organizations, and their pro-social justice supporters abroad, as the most pressing and immediate of threats. This is where the right is investing its legislative energy. But it is not the future of a democratic and Jewish Israel that these activists threaten. It is the dominance of the emirate archipelago of the settlements that they truly endanger.

The activists have a secret that the government has been thus far unable to combat. They have discovered a way to bring the bloated giants that run government institutions, to their knees:

Hidden from view by the giants' bulk, they locate sores and bunions and gout on the giants' overtaxed feet, and then, simply, stomp.

They find specific, vulnerable, potentially painful lesions, and they press down. And it works. The giant finds itself incapacitated.

The targets: some of the country's most powerful giants. Two examples among many:
1. Sheikh Jarrah, the dinky, makeshift, brilliant demonstration that materializes every Friday afternoon in East Jerusalem and which has bedeviled the settlement movement, Jerusalem's defiantly pro-settlement Mayor Nir Barkat, and the even more defiant, even more pro-settlement Jerusalem Regional Planning Commission.

2. El Araqib, the tiny Negev Bedouin village which the Jewish National Fund, aided by the Israel Lands Authority and more than a thousand police, have repeatedly demolished – 18 times at last count - in order to clear the way for a generous (to the JNF) Evangelical Christian group's God TV Forest. The Bedouin residents, supported by human rights activists and other NGOs, have returned to rebuild every time the JNF and ILA heavy machinery has rolled in to flatten their village.

This is what a revolution sounds like: The princes are in disarray. Some of the blood princes and princesses, like Tzipi Livni and Dan Meridor, heirs to commanders of the pre-state Irgun militia, now openly believe in and are working for a two-state solution, an independent Palestine alongside Israel, a major Israeli withdrawal from the West Bank.

Everywhere you look, if you look close, change is in the wind.

The very activists whom pro-occupation Israel sees as its worst enemies – Peace Now, the many grant recipients of the New Israel Fund such as the Association for Civil Rights in Israel, as well as a host of independent groups, are gumming up the works of occupation simply by shining light on it.

British novelist Ian McEwan, accepting on Sunday the Jerusalem Prize for Literature, spoke of "the continued evictions and demolitions, and relentless purchases of Palestinian homes in East Jerusalem, the process of right of return granted to Jews but not Arabs."

He also marked the occasion by donating $10,000 to an important NGO, Combatants for Peace, an organization, his website noted, "that brings together Israeli ex-soldiers and Palestinian ex-fighters. These ex-combatants go about in pairs, talking in public to make the case that there can be no military solution to the conflict."

Just as the settlement revolution has long energized and been supported by Jewish groups abroad, this new revolution for a socially just Israel has already brought change and new energy to the largest of Diaspora communities.

Although effectively boycotted by Israel's American-born Ambassador to Washington Michael Oren, and by the recent General Assembly of the Jewish Federations of North America, J Street's 2011 Conference (February 26-March 1) seems likely to live up to its billing of its "largest-ever gathering of pro-Israel pro-peace activists."

On March 14, across the States in Berkeley, Tikkun Magazine, which has no hesitation in describing itself as "strongly pro-Israel" alongside a progressive, critical perspective, will be marking its 25th anniversary. Among the honorees that night will be Judge Richard Goldstone.

This revolution has only begun, but it is gaining traction by the day. Over the past several days alone, it has been bolstered by the appointment of Israel's first openly gay judge, a disastrous setback for settler-driven McCarthyite legislation, and a grind to a halt for construction in the flashpoint settlement of Har Homa.

This revolution has only now begun. It will be waged in cyberspace and in city streets, in occupied areas and in Israel proper, in American synagogues and, in the end, the entire Jewish world. This revolution aims not only at the end of occupation, but at the beginning of a new Israel. Not for settlers, this time. For Israelis.

Help our us and our allies in Israel bring about the democratic revolution by making a tax-deductible gift to Rabbis for Human Rights Campaign for Bedouin-Jewish Justice in Israel.

Go here to make your contribution to justice and equality for Jews and Arabs in Israel's Negev.
Bradley Burston, Ha'aretz: A Special Place in Hell Published Feb. 23, 2011
Posted by Jewish Alliance for Change at 12:47 AM

Email ThisBlogThis!Share to TwitterShare to FacebookShare to Pinterest
Labels: Al-Arakib, demolition, ILA, In the News, JNF