How Not to Solve the Bedouin Problem, by Don Futterman, in Haaretz 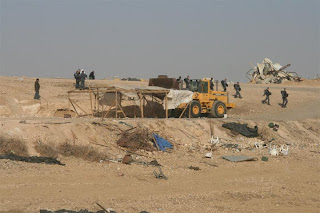 Prime Minister Benjamin Netanyahu's recent order to Justice Minister Yaakov Neeman to find ways to retroactively legalize illegal outposts on privately held Palestinian land should surprise no one familiar with the coalition's contempt for Palestinians and our legal system: If we can't have Greater Israel, at least we can have Lesser Palestine. But the government's legal arsenal is also being deployed against another target - Israel's Bedouin citizens in the Negev.

Every few years, Israeli leaders decide to solve the Bedouin problem once and for all. There are no shortage of challenges in Bedouin society that could benefit from government intervention: poverty; lack of government services; grossly inadequate education; a sky-high birthrate; polygamy; involvement in smuggling, trafficking and car theft; and officially unrecognized shantytowns that keep spreading as Bedouin continue to be refused legal building permits.

But the problem that bothers our government is Bedouin land claims.

The Bedouin claim they own a portion of the Negev - about 640,000 dunams (160,000 acres ), or 4.9 percent of the Negev's total area - because these are their traditional tribal lands. The government argues that this figure is misleading, because the Bedouin want a much higher percentage of the choice areas centered around Metropolitan Be'er Sheva, conveniently forgetting that many Bedouin were forcibly relocated to this area by previous Israeli governments. The government believes this land must be kept in trust for Jewish settlement, based in part on trumped-up security fears, to prevent a band of Arab settlement connecting Gaza and the West Bank.

The recently formed Bedouin Settlement Authority is yet another attempt to control the Bedouin, rather than help them. It has invested in a huge staff of lawyers and inspectors to find ways to neutralize Bedouin land claims and to expedite the removal of Bedouin from their villages. As in the West Bank, the government's legal firepower has been tasked not with helping citizens or getting at the truth, but with keeping land out of Arab hands by any means possible.

Three years ago, the government commissioned retired Justice Eliezer Goldberg to recommend how to address the Bedouin situation. Goldberg talked to members of the Bedouin community and discovered that instead of impoverished towns with no economic base, they wanted rural settlements where they could practice their way of life. Goldberg advised that as many as possible of the Bedouin villages be left in place and recognized, presumably under a leasing arrangement like that enjoyed by kibbutzim and moshavim, and that as citizens, the Bedouin should be involved in determining their own future.

Although Goldberg did not endorse Bedouin claims of land ownership, he acknowledged that the Bedouin have a tenable, historic connection to the land they live on, and are neither squatters nor trespassers - a radical admission for a government-sponsored entity. While not satisfying Bedouin leaders, Goldberg's recommendations were a thoughtful leap past the sloganeering demonization that usually passes for government policy in the Negev.

But Yisrael Beiteinu and other right-wing parties objected, basing themselves on an interpretation of the Zionist mission that can only be considered anachronistic. Sixty-three years since we became the lords of the land, right-wing ideologues insist we are still fighting to redeem the Land of Israel. Every dunam given the Bedouin is considered a loss for the Jewish people, rather than a gain for Israeli society. Under political pressure, many of Goldberg's recommendations were dumped by Netanyahu's point person, Udi Prawer, who agreed to recognize Bedouin ownership for half of the lands currently occupied - about 200,000 dunams - but dismissed the recognition of additional villages. Prawer dredged up the old program of concentrating the Bedouin around their failed townships, with the addition of the 11 villages recognized as part of the Abu Basma Regional Council.

When that didn't satisfy his coalition partners, Netanyahu brought in his national security advisor, Maj. Gen. (res. ) Yaakov Amidror, to be his hatchet man. Choosing Amidror meant Netanyahu had decided to reject Goldberg outright, and to regard the Bedouin as security problems rather than as citizens.

In Amidror's plan, apparently none of the other 35 villages will be recognized, and far less land will be registered under Bedouin ownership. An estimated 30,000 Bedouin will be forced to leave their homes, this time with the imprimatur of the Israeli justice system. Furthermore, Bedouin citizens are to be excluded from the decision-making process. It's a pity, not only because this course will lead to unnecessary conflict and damage the credibility of our legal system, but also because there are other choices. The Regional Council of Unrecognized Villages (RCUV ) and the NGO Bimkom: Planners for Planning Rights, drafted an alternative plan for developing the Negev that includes giving unrecognized villages legal status and providing proper planning for their development. There are about 100 days to change course before Amidror's plan takes effect. The government should emulate Bimkom, soliciting input from Bedouin leaders and villagers, including, outreach to Bedouin women. The real Zionist challenge for 2011 is not to guard land from Bedouin for the sake of the Jewish people, nor to deploy the courts against our own citizens, but to figure out how Jews and Arabs can participate as equals in the democratic life of this country.

Don Futterman is the program director for Israel of the Moriah Fund, and one third of the podcast team of The Promised Podcast, a weekly discussion of Israeli politics from a progressive perspective.

Read More: http://www.haaretz.com/print-edition/opinion/how-not-to-solve-the-bedouin-problem-1.392403
Posted by Jewish Alliance for Change at 3:03 AM