Bedouin Battle to Stay in Their Villages Ends in Rubble, by Ruth Pollard, in The Sydney Morning Herald 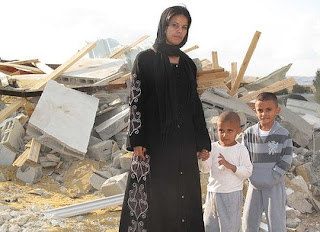 Al-Sira, Israel: The Israeli authorities came without warning last week, and despite her pleas for time to pack, the house Rifa al-Oqbi shared with her two young sons was demolished, and with it, some of their most valued possessions.

Smashed pale blue and white floor tiles lay among the debris of broken brick blocks and wooden framing, as her sons Ali, 5, and Omar, 4, played in the rubble of what once was their home in their village in the Negev Desert.

The village was under a demolition order, but experts say there is rarely any warning before the bulldozers arrive.

''They asked me to immediately leave my house, and I asked them for 24 hours so I could remove the furniture and my other belongings … and they said no,'' the 31-year-old explained. ''They closed this entire area, and when I tried to grab one more thing, they beat me and threw me to the ground … and beat up a relative who came to help.''

Israel's long-term goal of evicting between 30,000 and 40,000 indigenous Bedouin from their lands in the Negev Desert in order to create new Jewish settlements was cemented on September 11 with the adoption of the Prawer Plan.

Due before parliament in the coming days, opponents of the plan say it will result in the seizure of two-thirds of the Bedouin's land, destroy all but 10 of the 45 ''unrecognised'' Bedouin villages in the Negev and extinguish the Bedouin's land claims without proper compensation.

They have already been ''corralled onto the smallest amount of land possible,'' he said.

''If you take the land from the Bedouin … you are denying their right to exist.''

Professor Abu Ras, who is also a professor of political geography at Ben Gurion University, has just returned from a lobbying trip to the US to try to raise the plight of the Bedouin.

The Israeli cabinet this week gave the green light for work to begin on 10 Jewish settlements in the area ''to attract a new population to the Negev''.

On Thursday, the Prime Minister, Benjamin Netanyahu, met the mayors from some Bedouin villages before the implementation of the plan, in which the 10 villages that are allowed to remain will become eligible for government services.

All others will be razed and their residents forced to move to towns such as the government-created Hura, which has schools, a medical clinic, paved roads, water and electricity. To many Bedouin, Hura is overdeveloped and has no agricultural land for grazing. It ''feels like a prison'', one community leader said.

Mr Netanyahu said the plan would ''allow the Bedouin, for the first time, to realise their assets and turn them from dead capital into living capital to receive ownership of the land, which will allow for home construction, according to law, and for the development of enterprises and employment. This will jump the population forward and provide it with economic independence.''

In a report before the development of the Prawer Plan, retired judge Eliezer Goldberg recommended that many Bedouin villages be recognised, acknowledging their ''general historic ties'' to the land.

Then the government asked the former deputy head of the National Security Council Ehud Prawer to implement Justice Goldberg's recommendations.

He instead proposed the immediate transfer to the state of half the land claimed by the Bedouin, with minimal compensation for the remaining land. Not a single Bedouin was consulted by the committee.

One village, , al-Araqib, which is home to about 300 Bedouin, has been demolished and rebuilt 29 times in the past 18 months.

The battle between Israeli forces and Bedouin in al-Araqib is played out with monotonous regularity. It is a process repeated throughout the region.

Khalil al-Amour, school teacher, law student, father of seven and the leader of the village of al-Sira, knows this battle. His house, along with the rest of the village of 47 homes and 500 people, is the subject of a demolition order. ''It is about cramming the maximum Bedouin onto the minimum amount of land,'' he said.

And because his village is one of the many ''unrecognised villages'', there is no running water, electricity, social services or schools. They are cut off from the rest of Israeli society, despite the fact they serve in the army, vote, pay taxes and speak Hebrew, and some work in nearby Beersheba and other major centres.

Many are now fighting through the courts for ownership of what land they have left .

Mr Amour has a document he says proves his family's ownership of the land, dated November 23, 1921, notarised by Britain. It is not recognised by Israel.

There is often a deep misunderstanding of what it means to be a Bedouin, fuelled partly by a romantic image as the original nomads of the desert, resistant to the ways of the modern world.

''Bedouin are not against development and advancement and improvements to our lives,'' Mr Amour said. ''We just reject the way the government imposes this on us. They are asking us to move to cities and towns that are the antithesis of Bedouin being. Israel uses a demolition order to 'encourage' us to move''.

Forced to live under the constant threat of demolition the people of al-Sira are deeply frustrated and depressed.

''Even though they are determined to stay and fight, everything we build in this environment may not be here for the long term, so we build very rough just to survive,'' Mr Amour said.

Professor Abu Ras said the plan to push the Bedouin from their land had been under development since the establishment of the state of Israel in 1948, when they were first moved into what is known as the ''siyag triangle'' in the Western Negev, with the promise that they could soon return to their ancestral lands. ''They are still waiting.''

He estimates that under the Prawer Plan the Bedouin would receive just 100,000 dunams (10,000 hectares) of their outstanding claim of 600,000 dunams and monetary compensation will be far less than half the land value.

For many Bedouin, some of whom have already been forcibly relocated at least once by the government, that compensation is just not enough.