Bedouin Citizens of Israel Are Campaigning for Their Rights, in The Economist 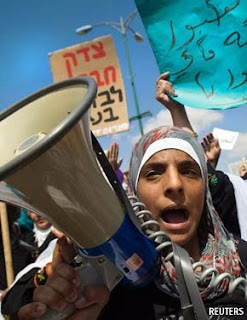 THE Bedouin of Israel are not a happy lot. Once nomadic lords, Binyamin Netanyahu’s government plans to pen tens of thousands of them into cities. This may be Israel’s biggest removal of Arabs from the land since the 1948 war.In the Israeli-occupied West Bank, soldiers knock down their shacks with abandon. Plans are afoot to transfer some 2,000 to the edge of a rubbish dump to make way for more Jewish settlers east of Jerusalem. To cap it all, religious Jews recently torched a mosque in Tuba, a Bedouin town in the north-east of Israel.

Traditionally split into often feuding clans, the nomads have been easy for Israel to divide, conquer, shift and, at least in the Israeli state’s early days, expel. Whole tribes of Bedouin once roamed from Libya to Iraq. But concrete walls and a regime of permits have splintered them, reducing contact, commerce and marriage between Israel’s 200,000 Bedouin, the West Bank’s 40,000 and millions beyond, in Gaza, Jordan, Sinai and the Arabian peninsular.

Forced first into narrow enclaves and then into towns, they have generally downsized from camels to goats. Many have abandoned their herds entirely. The West Bank’s last surviving herders are hemmed in by Israeli military bases, by-pass roads and Jewish settlements. Israeli soldiers confiscate flocks that stray. The settlers see them as trespassers and bar access to springs.

Life in Israel proper is little better. Nearly half the Negev’s Bedouin live in villages often predating the state but officially unrecognised and so denied state support. There are no paved roads, public transport, electricity or water. Alongside Wadi Naam, a dusty Bedouin camp of 4,000 people, a toxic waste plant puffs away.

The Bedouin once hoped to integrate. Unlike most Israeli Arabs, bar the Druze, some volunteered to serve in Israel’s army. But the latest plan for mass resettlement is changing the mood. Mr Netanyahu’s advisers say they are simply rehousing squatters. Even the Palestinian Authority, the proto-government on the West Bank, seems to hold its nose.

Israeli officials say the masterplan for mass resettlement will entail an unprecedented transfer of government land to Israeli Arabs. Bedouin who can prove entitlement will receive half their land, or compensation. “By law the government owns the land,” says Ehud Prawer, the official who devised the plan. “But as long as the dispute continues, the Bedouin can’t cultivate it and we can’t develop it. We need a compromise.” “Concentrated” in new towns, he adds, the Bedouin will get all the services they are now denied.

The Bedouin are refusing to budge. “When a Jewish Israeli wants to go and live in the Negev, it is called the development of the south,” says Rawia Abu Rabia, a Bedou lawyer. “But when Bedouin already living there want to go on living in the same place, it is considered an effort to take over state lands.” Some people say it could be a dry run for transferring Arabs in northern Israel to the West Bank.

The Negev’s Bedouin are forming a Council of Bedouin Tribes. Less genially, Tuba’s youths protested against the torching of their mosque by vandalising the town council building. The sole Bedou in Israel’s parliament, Taleb al-Sana, warns of a Bedouin intifada if the planners persist.

In neighbouring countries, the Bedouin are also on the move. In Jordan, where they once were top dogs, they have staged protests against a monied, urbanised Palestinian elite. In Egyptian Sinai they have risen up against the remnants of the ousted Hosni Mubarak’s security regime.

Might a pan-Bedouin identity yet arise, linking the Bedouin under Israeli rule with the million or so scattered across the region? Many of Sinai’s angry Bedouin carry Israeli mobile telephones, renewing contact across borders after decades of separation. The lucrative tunnels linking Gaza to Sinai are reviving commercial ties. A high birth-rate adds confidence in numbers. A newly educated elite is fashioning a political identity. “We’re all victims of the same policy to dispossess us,” says Muhammad Korshan, a West Bank Bedou activist.

This year he went to New York to ask the UN’s Forum on Indigenous Peoples to recognise the Bedouin as an ethnic-minority people with rights to tribal lands. They have a long way to go. Unlike Berbers and Kurds, they have no flags or leaders. But a belated bid for recognition has begun.

Posted by Jewish Alliance for Change at 12:50 PM