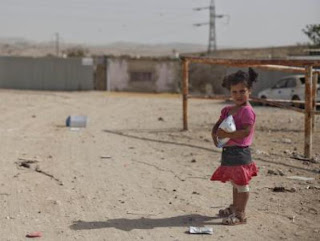 Listen to the interview broadcast on NPR-affiliate WBEZ here.

Last month, the Israeli government approved a plan to relocate 30,000 Bedouin Arabs living in unrecognized villages and tent encampments in southern Israel to settlements recognized by the state. Critics say the plan forcibly removes people from their ancestral lands and sends them to some of the most destitute parts of the country.

We hear from a wide range of Israeli citizens, both Arab and Jewish, who are concerned about the relocation. The activists are on a tour of the U.S sponsored by the Telos Group and the Campaign for Bedouin-Jewish Justice in Israel and Rabbis for Human Rights-North America.

Rawia Abu-Rabia is a civil rights attorney, a Palestinian Bedouin citizen of Israel who heads the Bedouin project of the Association for Civil Rights in Israel. Michal Rotem is a Jewish Israeli with the Negev Coexistence Forum for Civil Equality in Israel. And Dr. Thabet Abu Ras is an academic who works for minority rights with Adalah: the Legal Center for Arab Minority Rights in Israel.

Posted by Jewish Alliance for Change at 10:56 AM