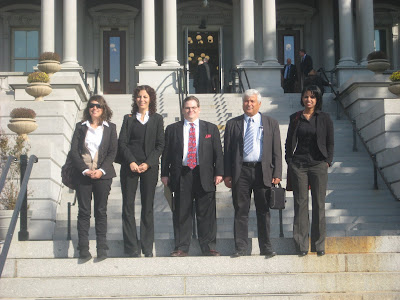 Doni Remba, who coordinates a Bedouin project for Rabbis for Human Rights-North America and the Jewish Alliance for Change, said the White House officials met Wednesday with him and delegates from the Association for Civil Rights in Israel; Adalah-the Legal Center for Arab Minority Rights in Israel; Sidre, a Bedouin women's empowerment group; and Dukium, a Negev Desert Jewish-Arab coexistence forum.

The Prawer plan, approved last month by Israel's government, is set to remove up to 40,000 Negev Bedouin from villages and settlements that the government does not recognize.

Bedouin activists say the compensation being offered by the government is too low and that some of the unrecognized villages should be incorporated as part of any government plan.

Israel says its planned resettlement program includes fair compensation, has been permitted by the courts and clears critical areas of the Negev for planned development.'

Posted by Jewish Alliance for Change at 11:29 AM