Arab-Israeli towns go on strike over plans to confiscate their land, The Guardian 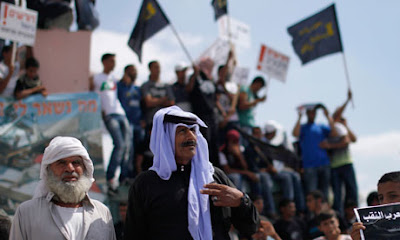 If Israel's parliament approves the proposal, 30,000 Bedouins could be removed from their homes in Negev within 60 days
Bedouins living in Israel's southern Negev region protest against government plans to confiscate their land. Photograph: Amir Cohen/Reuters
"Mark Regev, spokesman for Israel's prime minister, Binyamin Netanyahu, said the aim of the government was to assist the Bedouin minority by assimilating them into wider Israeli society. "The Bedouin community has a lower standard of health care and education than the rest of Israel, they live in substandard conditions. We are investing 1.2bn shekels [£210m] to move them into the mainstream, to reduce that gap."

This is Orwellian double-speak: if the Israeli govt wants to improve the living conditions of the Negev Bedouin, let them honor their wishes and develop and modernize the villages in which they live, without forcing tens of thousands of them off their land with brutal violence as they have at Al-Arakib and other villages, and concentrating them in urban townships in which they do not want to live. The bottom line: the Netanyahu govt covets Negev Bedouin land for developing new Jewish settlements and JNF forests.

The govt's plan is designed to confine the Bedouin into reservations to free up their land for "Jewish development." This is an immoral policy that discriminates against non-Jewish Israelis in favor of Jewish Israelis and sabotages democracy and equal citizenship in Israel. It empties of meaning the "democratic" in Netanyahu's and Lieberman's demands that Israel be recognized by the Palestinians as a "democratic Jewish state," and insures that it will be seen as an undemocratic Jewish state which oppresses its minority non-Jewish Arab and Palestinian citizens. Why would the Palestinians recognize a Jewish state that mistreats and discriminates against its Palestinian and Arab citizens?
The article follows:
Six Arab-Israeli towns in Israel's southern Negev region have ground to a halt in protest at government plans to confiscate swathes of land from the Bedouin community. If the proposal passes through the Knesset, Israel's parliament, unopposed, 30,000 people could be forced from their homes within 60 days.
Schools, shops and municipal offices across the region closed for the day allowing more than 8,000 people to stage a demonstration in Beersheba rejecting the plan – the largest civil protest in the city's history. Arab-Israeli MP Jamal Zahalka said they were united against the proposal.

"We want to send a very clear message to the Israeli government – we are saying no. This demonstration proves that Israel's plans will be thwarted. Nobody here today will co-operate with them."

He added that the protesters would not allow another Nakba, the Palestinian term for the events of 1948, in which hundreds of thousands became refugees.

The Israeli ministerial committee approved a plan to settle the long-standing land dispute between the Bedouin communities in the Negev and Israel on 11 September. Based on a report produced for the prime minister's office, it suggests that more than 30,000 Bedouin living on land claimed by Israel should be resettled in six towns created and recognised by the state in 1973.

Of the 12,000 sq km (2,965,000 acres) of Negev land, the government plan apportions 200 to the Bedouin, with compensation offered to anyone forced from land they can prove ownership of.

Around half of the Negev's 180,00 Bedouin live in unrecognised villages, without running water, electricity or public services of any kind. They are the poorest minority group in Israel.

Mark Regev, spokesman for Israel's prime minister, Binyamin Netanyahu, said the aim of the government was to assist the Bedouin minority by assimilating them into wider Israeli society.

"The Bedouin community has a lower standard of health care and education than the rest of Israel, they live in substandard conditions. We are investing 1.2bn shekels [£210m] to move them into the mainstream, to reduce that gap.

"The idea that the Bedouin do not want to make this move is simply not true."

Bedouin leader Amal Elsana-Alh'jooj said the report failed to recognise Bedouin claims to the land prior to the creation of Israel, as recommended by the government-commissioned Goldberg committee in 2008. An estimated 90,000 Bedouin lived in the Negev before 1948.

"If we accept what they are offering, we will see a violent, over-crowded poverty-ridden area," she said. "We want to restart the negotiating process so we the Bedouin can start to contribute to the area and not just be people living in poverty."