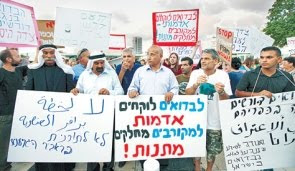 Protesters object to the cabinet's approval of plan addressing ongoing dispute between the state and the Bedouin over land ownership rights.

Negev Bedouin who oppose new government proposals to relocate some of the region's Bedouin residents and give official status to other currently unrecognized Bedouin communities brought their protests to Tel Aviv on Monday. They were joined by several hundred additional activists, including representatives of organizations active in social and human rights issues.

The protesters are objecting to the cabinet's approval two weeks ago of a plan that would address the ongoing dispute between the state and the Bedouin over land ownership rights. Although the plan grants official recognition to some unrecognized Bedouin communities, it also calls for the relocation of 30,000 Bedouin to recognized villages.

Monday's demonstration started at a building on that has become a center of the social protest movement. Among those attending the gathering was Sheikh Sayah Al-Turi of the unrecognized Al-Arakib village, which has been demolished and rebuilt 29 times. From there, the demonstrators marched to the government offices in the vicinity of the Defense Ministry headquarters.

"We have to tell the truth. Did we invade the State of Israel or did the State of Israel invade our land and the land of our ancestors when the state was established?" Al-Turi asked, adding that while the Bedouin wanted to forget what happened with the establishment of in 1948, Prime Minister Benjamin Netanyahu wanted to revive the issue.

"[Netanyahu] said the Arabs in have a high standard of living, but I live in a village without running water, electricity or medical services," the Bedouin leader said in reference to his unrecognized village. Al-Turi said the Bedouin were not prepared to move to other land.

"I don't understand how Netanyahu wants to make peace with the Palestinians and with the Arab countries if he is incapable of creating good relations with the Arab citizens of his country," Al-Turi added.

Posted by Jewish Alliance for Change at 1:24 PM