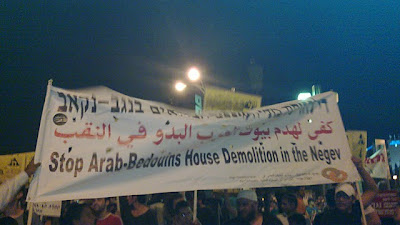 The English edition of Ha'aretz has again whitewashed a major story about the Negev Bedouin from the Hebrew edition: the sub-head in the Hebrew reads in part (omitted from the English version):

"The plan involves evacuating 30,000 people from their homes. Bedouin: 'This is a declaration of war.'"

Is Israeli reality too ugly for delicate Western ears?

The English headline sounds positively charming, as if this is all good: "Israeli cabinet set to vote on approval of unrecognized villages," a headline which grossly misrepresents what the Israeli government is about to approve: the NON-RECOGNITION OF MOST BEDOUIN VILLAGES AND THE FORCIBLE EXPULSION OF THEIR RESIDENTS. (For background on this vote on the "Praver Plan," see "Cabinet Ministers will vote on the evacuation of 30,000 Bedouin from their homes," Ha'aretz Hebrew edition translation by Campaign for Bedouin-Jewish Justice).

And the English version omits the sub-head in the Hebrew original which makes clear that the Netanyahu-Lieberman government's plan involves forcibly relocating 30,000 Bedouin Israelis. This fact is relegated to the last sentence of the English version, and is attributed to the NGO Bimkom, relegating it to secondary importance, as if it isn't a significant facet of the government's plan - not worthy of a headline.

Ha'aretz has belatedly rectified these omissions by publishing in the English edition a report under the headline: "Negev Bedouin to ask UN for help to quash Israeli transfer plan; Cabinet delays vote on plan to move thousands to recognized Negev towns," 9/5/11.

Posted by Jewish Alliance for Change at 7:28 PM