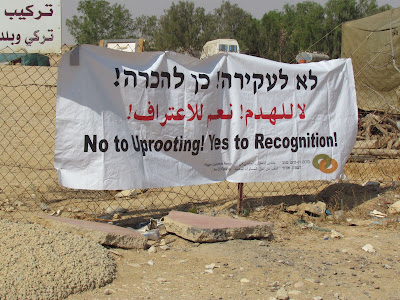 The Campaign for Bedouin-Jewish Justice joins with the Association for Civil Rights (ACRI) and the many in who were appalled to learn that the Netanyahu government voted on Sept. 11, 2011 to approve the Praver Plan to address the problem of unrecognized Bedouin villages in the .

Rather than recognizing the systemic violations of the rights of the Bedouin, the Praver Plan continues the discrimination of one of the most disadvantaged communities in , at the very time when a mass Israeli protest movement has been calling for social justice for all citizens.

The Praver Plan, which was prepared without any consultation whatsoever with the Bedouin community in the unrecognized villages, will lead to the needless uprooting of tens of thousands of Bedouin from their homes, in flagrant violation of their human and civil rights.

An Alternative Master Plan, submitted by the Regional Council of Unrecognized Bedouin Villages and Bimkom - Planners for Planning Rights, proposes to keep all 35 unrecognized villages intact and to connect them to infrastructure and services, while saving massive amounts of resources necessary for uprooting villages that have existed since before the State was established.

Only an approach based on respect for the human rights of the Bedouin population, that includes them in the process, will bring about a lasting solution for all residents of the Negev, both Arabs and Jews.

The Campaign for Bedouin-Jewish Justice is working with our allies in Israel - including the Association for Civil Rights in Israel (ACRI), Rabbis for Human Rights, Bimkom, and the Negev Coexistence Forum for Civil Equality - to build support in and the , both with the public and with NGO and government officials, for the Alternate Master Plan and to stop the Praver Plan.

The Policy Brief, titled “Principles for Arranging Recognition of the Bedouin Villages in the Negev,” provides an overview of the Bedouin, the Goldberg and Praver Plans, and guiding principles for the proposed alternative solution.

Help support our efforts to stop the expulsion of tens of thousands of Bedouin in Israel, gain recognition for the Negev Bedouin villages, and ensure respect for the human rights of the Bedouin citizens of Israel.

Posted by Jewish Alliance for Change at 2:24 AM