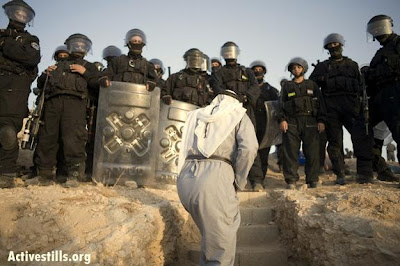 Israel Police is establishing a new unit to enforce demolition and evacuation orders served to scattered Bedouin villages in southern Israel, in order to deal with “trespassing into state lands.”

The unit, which will be made up of 200 police officers, will be established in cooperation with the Prime Minister’s Office to enforce Israeli land laws in the Negev.

The unit’s establishment follows a government decision reached last August, in which Minister of Internal Security Yitzhak Aharonovich was granted permission to begin deploying the officers beginning August 1, 2012. Israel Police’s Southern District has yet to announce an official plan of operation, which will be charged with evacuations and demolitions.

The unit will operate alongside the Interior Ministry, the Israel Land Administration, the Ministry of the Environment, and the Prime Minister’s Office among others.

The plan to establish the new unit was received with harsh criticism from Negev residents, who claim that the use of force by police as a means to solve the land dispute is the “wrong move.”

“We do not need the police in order to reach an agreement. We must sit down and solve the issue through negotiations,” said Ibrahim al-Wakili, who heads the regional council of unrecognized Bedouin communities in the Negev. “We are not interested in a confrontation with the police…the police previously used violent force against young children.”

Israel Police’s Southern District has refused to comment on the matter.

The announcement of the unit’s establishment comes less than a month after a five-year economic development plan for Israeli Bedouin was approved by a steering committee in the Prime Minister's Office, as part of operational plans for relocating tens of thousands of Bedouin to officially recognized communities.

The proposal calls for the relocation of up to 30,000 Bedouin from areas not recognized by the government as residential locations. Known as the Prawer Plan, it was approved by the cabinet in September, based on a proposal developed by a team headed by the director of policy planning in the PMO, Ehud Prawer. At that time, the cabinet also approved a NIS 1.2 billion economic development program for Bedouin Negev.