Is a College Really What the Bedouin Need Right Now?, by Merav Michaeli, in Haaretz 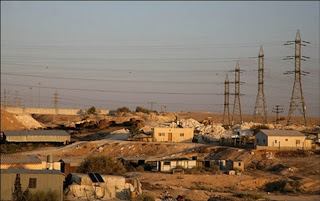 While the Age of the Negev project is an excellent initiative, it will not solve the problem of the deprivation of the Bedouin's living expanse, with the Prawer Law still threatening the relocation of most of them.

President Shimon Peres will tour the Bedouin city of Rahat on Monday and announce the establishment there of a university campus, according to a report Sunday in the media. The question is: Is a college really what the Bedouin urgently need right now?

Apparently, the college has been in the pipeline for over six years already, at the initiative of local agents. The answer then, according to activists Safa Abu Rabia and Amal El-Sana, is a definite yes. Education and intellect are no less important aspects of life, they say, and it's time for the public image of the Bedouin to reflect this, and not only poverty and squabbles over land; after all, books are read and computers are used in the non-recognized villages too.

The college is being planned as part of the Age of the Negev project: an employment park - employment, not industrial, stresses Sigal Moran, who heads the Bnei Shimon Regional Council, where the park is located. An employment park because the emphasis there is not on industry but on employment - in other words, on people, and primarily on Bedouin women from the area. The stated goal: Of the 3,200 jobs on offer, at least half of them, at all levels, will go to Bedouin women.

This excellent initiative comes from the former head of the regional council, Moshe Paul - cooperation among the Bnei Shimon Regional Council, which has a ranking of 6 on the Central Bureau of Statistics' socioeconomic scale, Rahat, which has a ranking of 1, and Lehavim, with a ranking of 9. Moreover, although the park itself is located in the jurisdiction of Bnei Shimon, Rahat has been given a 46-percent stake in the joint company that will manage it. In other words, Rahat will get 46 percent of the municipal taxes collected - no less important a matter for the men and women of the city than the employment.

Another important matter is the fact that one of the 21 enterprises that have already been approved for the park is the SodaStream factory, which has moved there from Ma'aleh Adumim. Apparently, it is possible: cooperation between Jews and Bedouin for the good of all within the borders of sovereign Israel, instead of participation in depriving the Palestinians of their living expanse.

But the Age of the Negev project will not solve the problem of the deprivation of the Bedouin's living expanse, with the Prawer Law still threatening the relocation of most of them - in a manner that will allow the state to register as much land as possible in its name and concentrate the Bedouin on as little land as possible, leaving many of them without property, without rights and without a roof over the heads.

And if the Prawer provisions go into effect, the plight of the Bedouin women will be even worse. These women are the most weakened sector in Israel. Time is too short to detail their unique statistics here, but a legal report by Itach-Maaki - Women Lawyers for Social Justice outlines how the law disregards them entirely and prevents many of them from ever achieving the right to ownership, recognition of their children's rights, and the right to shelter for those who need it.

A college for Bedouin men and women is an excellent idea, but life itself must certainly be dealt with too. Home demolitions must cease; the Bedouin must be hooked up to decent infrastructure services; existing villages must be recognized; and kindergartens, pre-schools and schools must be set up for the girls and boys so that they will be able to study at the new college some day. The college-in-the-works must not be allowed to whitewash the continuing trampling of the Bedouin's fundamental rights.

Under Peres' vision, Bedouin and Jewish students will study on the campus side by side. This vision ignores the fact that already today, Jews and Bedouin study side by side at Ben-Gurion University of the Negev; nevertheless, Jews going to study at a bilingual college adjacent to Rahat would be a worthy innovation.

But the spirit of this vision should start with Jews including the Bedouin and allowing them to participate in the discussions over their own future. The Bedouin were not party to the discussions of the Goldberg Committee or on the Prawer guidelines - and certainly not Bedouin women. In fact, the Prawer guidelines were prepared at the Prime Minister's Office, under a cloak of secrecy befitting a military operation against the enemy.

The Bedouin are not an enemy; and their neighbors in Lehavim and Bnei Shimon appear to realize this. It would be so much better for all of us if one day the government of Israel was to understand that too.

Email ThisBlogThis!Share to TwitterShare to FacebookShare to Pinterest
Labels: Ha'aretz