The Negev: A Bedouin Village versus a JNF Forest, by Allen Katzoff, in The Times of Israel 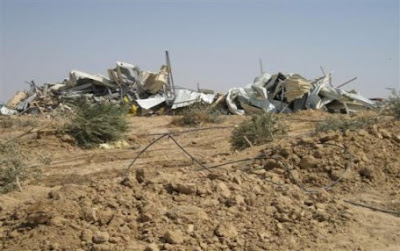 The sky was clear blue after many days of rain when we drove to Al-Arakib near Beer Sheva in the Negev. The air was cool but the sun strong. All around us the desert bloomed as we turned onto the dirt road, passed a small cemetery on the left and pulled up before a large three-sided Bedouin tent. In the distance I saw groves of trees on higher ground. But the surroundings around the tent were barren, just sandy ground and rocks. I would soon find out why.
The remains of a building after it was demolished at Al-Arakib.
Note the olive and fruit trees cut down in front of it.

I was visiting Al-Arakib with Rabbi Arik Ascherman, Director of Special Projects at Rabbis for Human Rights, on one of his regular visits to the area. The Bedouin in the Negev have become a particular concern for Arik. His organization’s focus is based on the biblical precept that all people are created in the image of God (B’tzelem Elokim) and that Jews have a moral obligation to fight injustice wherever it occurs.

Soon after we were seated on carpets in the tent, Sheikh Sayakh, an older distinguished-looking man wearing a keffiyeh, entered and grasped Arik’s hand between his, smiling broadly and greeting him warmly like a dear friend. While traditional Bedouin coffee was served, I heard the village’s story.

For generations, the people of Al-Arakib lived on their land, farming and herding sheep and goats. Olive orchards surrounded the village. In 1951, the villagers complied with a government request to leave their land for six months to make room for army exercises. Subsequently they were not allowed to return. Israel then expropriated the land without compensation claiming it was not legally owned. The village residents did not learn of the seizure until twelve years ago when they returned to live on their ancestral lands upon hearing that the Jewish National Fund (JNF) was to blanket their village and fields with a forest.

Today the issue is in court proceedings. Villagers still have receipts of land taxes they paid during the Ottoman and British Mandate periods as well as their traditional land purchase contracts that were recognized as valid by those governments. However, because actual land registration under the Ottomans and British was fragmentary, the residents of Al-Arakib, like most other Bedouin in the Negev, have no registry deeds.

Al-Arakib is one of 35 Bedouin settlements in the Negev, all in the same predicament. These villages, which account for 5% of the Negev, predate the establishment of the state but the government claims the Bedouin are illegal squatters. Almost all houses have demolition orders against them because building permits are unobtainable. The Bedouin pay taxes, their children serve in the Israeli army, and many commute to jobs outside the villages. But they are not provided with electric or water hookups, sewers or trash collection. Yet they still choose their traditional lifestyle on their ancestral land in the desert.

The Israeli government perceives a demographic problem in the Negev: there are too many Bedouin and too few Jews. Last year the government approved the Prawer Plan that calls for the forced relocation of over 30,000 Bedouin from these villages into urban Bedouin towns. The towns are the poorest in Israel: crime-ridden, with severe housing shortages and sky-high unemployment. Once the villagers are removed, the JNF will plant forests and the state will build new towns to attract Jewish residents. Bedouin will not be welcome.

Which bring us back to Al-Arakib. On July 26, 2010, Prime Minister Netanyahu issued a warning that “a situation in which a demand for national rights will be made from some quarters inside Israel, for example in the Negev, should the area be left without a Jewish majority. Such things happened in the Balkans, and it is a real threat.” The next day, over one thousand soldiers backed by helicopters and bulldozers arrived at the village without warning. In three hours they demolished the homes of three hundred people. No one was allowed to remove their belongings before the demolitions. Large items such as cars and generators were seized. One thousand olive trees were destroyed. (Click here to view a video of that day)

The residents of Al-Arakib decided not to leave since leaving would have surrendered their land forever. They immediately scavenged through the wreckage for materials to build temporary shelters. The army returned eight days later to demolish those. And the process then repeated itself. The latest demolition was number 33. The remaining villagers now have their makeshift shelters and some prefab buildings in the old village cemetery. That affords them some protection because the government so far dares not intrude on sacred Muslim ground.

Sheik Sayakh walked with us through the remaining land of the village. Here and there were some concrete slabs, remnants of the old houses. But miraculously, small olive saplings were sprouting from the stumps of the old trees. Apparently olive trees are hard to kill unless you dig out the entire root system. A few hundred meters away, the JNF had just planted rows of samplings, bringing the forest much closer to the village. Soon eucalyptus trees will be planted all through that area, but scattered among them as they grow will be hundreds of olive trees, a living memorial to what once was.

Al-Arakib is emblematic of what will happen when the Prawer Plan is implemented. Thousands of Bedouin view the village as a trial run for what will befall them. A friend of mine, who has spent decades working in Bedouin towns, says the young, who in the past might have served in the army and gone to college, are becoming alienated and radicalized. In a recent press report it was recounted how a young Bedouin, who had served in the Israeli army, received his order to appear for his annual reserve duty on the same day he received from the government a demolition notice for his home. No firm date is given with these notices. The bulldozer will simply show up one day at this soldier’s door.