JNF Should Plant Trees, Not Uproot Families, by Rabbi Jill Jacobs, in JTA 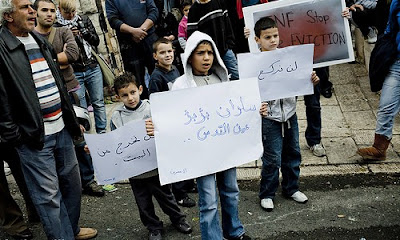 As a child, I proudly brought my spare change to Hebrew school to drop in the little blue boxes. With this money, my teachers told me, the Jewish National Fund would plant trees in Israel. I never imagined that these nickels and dimes would also help to evict Palestinians from their homes.

Last week, Rabbis for Human Rights-North America called on the Jewish National Fund and its partner organizations to issue a public statement that they will no longer evict Palestinians from their homes in eastern Jerusalem.

In November, RHR-NA mobilized American Jews to write nearly 1,500 letters to Russell Robinson, CEO of the Jewish National Fund of America, asking him to stop a JNF subsidiary from evicting the Sumarin family from their home in Silwan, a neighborhood of eastern Jerusalem. The eviction would have allowed the home to be transferred to Elad, a settler organization that aims to Judaize eastern Jerusalem. The Absentee Property Law, which was the legal basis for this eviction, allows the State of Israel to take possession of eastern Jerusalem properties whose owners were not physically present when Israel first took control of the area in 1967. In the case of the Sumarin family, the children of the original owner were declared absentees even though other members of the family were living in the home at the time.

Though JNF responded to the uproar among American Jews and halted the eviction of the Sumarins, the organization and its subsidiaries are currently pursuing other evictions.

It’s time for JNF once and for all to end its policy of evicting families.

By moving into Silwan and other eastern Jerusalem neighborhoods, ideological settlers are putting facts on the ground that make peace more difficult. Visiting Silwan last November, I saw the homes of recent Jewish settlers standing next to the homes of longtime Palestinian residents. These Jewish homes sported Israeli flags, guard booths, barbed wire and sky-high fences. The settlers walk through the streets carrying rifles. The juxtaposition between these fortified houses and the more modest ones of their neighbors serves as an answer to those who ask why Jews can’t live anywhere in Jerusalem. This is not an attempt at peaceful coexistence; it is an armed takeover that threatens the very possibility of peace.

I’m deeply concerned as well about the moral and democratic soul of Israel. I believe strongly that Israel has the potential to live up to the very best of Jewish values, and to be the “light unto the nations” to which its founders aspired. Jewish history teaches us the pain of being expelled from one’s home. And Jewish law sets up strong protections against seizing property without cause and without incontrovertible evidence. I am proud that Israel’s Declaration of Independence commits to “ensur[ing] complete equality of social and political rights to all its inhabitants irrespective of religion, race or sex.” I pray that we will realize this vision soon.

Settler organizations argue that the Absentee Property Law simply allows for the return to Jewish hands of property owned by Jews before 1948, but the argument fails the test of fairness and democracy. First, the properties are not being returned to the families who left after the partition of Jerusalem but rather into the hands of settlers with an ideological desire to Judaize the area and transfer Palestinians out. Second, there is, of course, no parallel law allowing Palestinians to reclaim ownership of homes that their families owned before 1948. Such a law would mean the end of many western Jerusalem neighborhoods that are now Jewish, and even of Israel as we know it.

Finally, the situation in Silwan has opened many of our eyes to the role of American Jewish money. It makes the news when mega-donors like Sheldon Adelson, Irving Moskowitz or Ira Rennert invest millions of dollars into building new settlements or financing Jewish enclaves in Palestinian neighborhoods. But those of us who give money to “neutral” organizations, such as JNF, may believe that we are only helping to plant trees, contribute to economic development or even support Jewish-Arab cooperation projects. Our donations to JNF do support such praiseworthy activities. At the same time, these contributions support the uprooting of Palestinian families, the development of settlements, the forced displacement of Bedouin Israeli citizens and other activities that violate human rights.

In the world of Israel politics, very little is neutral. Adelson and other right-wing billionaires invest in projects that reflect their vision of Israel. Those of us who believe in building a country that reflects the best of Jewish and democratic values must similarly invest in work that reflects our vision of what Israel should be.

I hope that JNF will retain the trust of American Jews who support peace and justice. I therefore call on JNF to end policies that set up roadblocks to peace.