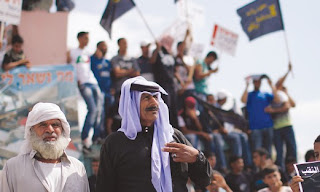 In a precedent-setting ruling on Sunday, the Beersheba District Court rejected six lawsuits brought by Beduin regarding private ownership of around 1,000 dunams of land in the Negev.

Seventeen Beduin, members of the al-Uqbi family, filed the six land claims. The complex and often bitter legal proceedings went on for over six years, and discussed in detail the history of the Negev Beduin and land laws dating back to the mid-nineteenth century.

The Beduin claim the land had belonged to their families since before the establishment of the State of Israel in 1948, and that it had come into their possession by means of purchase and inheritance over generations.

However, in 1951 they say they were evacuated from the land when the IDF confiscated it, and since then the state has not granted them permission to return, and has said the land belongs to the state and was never privately owned.

Significantly, the land in question - south of the Beduin city of Rahat - includes the hotly contested area known as al-Arakib, the site of an ongoing and bitter conflict between Beduin and the state. Temporary shacks built by the Beduin in al-Arakib were demolished by the state and rebuilt on more than ten occasions, the last in 2010, and last year the state filed a NIS 1.8 million lawsuit against two Beduin families over the issue.

During the al-Uqbi lawsuit, both the state and the Beduin brought extensive expert testimonies, pitting the country's most prominent experts in historical and political geography against each other. For the plaintiffs, Ben-Gurion University's Professor Oren Yiftachel, one of the country's foremost critical geographers and social scientists, gave expert testimony. Testifying for the state was Professor Ruth Kark, a leading expert on the historical geography of Palestine and Israel from the Hebrew University of Jerusalem.

At the heart of the case was the debate of whether the Beduin were able to prove that they had private land rights to the disputed plots despite a lack of formal land title deeds showing the land had been registered in their name in the Ottoman land registry, the 'Tabu'.

Central to this was the question of the land's legal classification under Ottoman and British rule, and whether it had been a form of state land, known as Mawat (wasteland that could not be cultivated).

When the Israel Land Law abolished the old Ottoman land classifications in 1969, it said all land would revert to state lands unless a claimant could produce proof of private ownership in the form of Ottoman or British legal title.

The British Mandate authorities stipulated that the last date by which Beduin could register land classified as Mawat as privately owned was 1921, however the al-Uqbis - like most Beduin - had not done so.

Mawat lands were both uncultivated and not adjacent to settled lands. The Beduin, who argued that the el-Ukbi families had lived at al-Arakib before the State of Israel was established, testified that there had been tents and other structures on the land and that Beduin residents had cultivated barley and wheat there. Therefore, they argued, the Ottoman authorities can not possibly have classified it as Mawat.

In an expert opinion filed to the court, Professor Yiftachel said that these "tribal areas" of scattered tent clusters were not at that time registered with the authorities but were nevertheless considered "settled"and met the definition of a "village" in the 1921 Land Ordinance.

The Beduin also presented aerial photographs from 1945 onwards, which they said showed there had been extensive cultivation covering al-Arakib, meaning that it could not have been classified as Mawat land.

The state's expert witness, Professor Ruth Kark, gave the complete opposite view, and said that prior to 1858, there had been no fixed settlements on or near to the disputed land. The first fixed settlement had been Beersheba, she said, which the Ottomans founded in 1900 and which is 11 kilometers from al-Arakib, refuting the Beduins' claims that the land could not have been Mawat because it was both cultivated and next to a settlement.

They also contended that the Ottoman and later the British authorities had in fact granted legal autonomy to the Negev Beduin to organize land ownership according to Beduin law, which is why it was not registered as theirs in the Tabu.

However, the court did not accept this claim, saying that if the Ottoman authorities had wished to exempt a particular population from the law, then they would have done so explicitly.

Rejecting the claims, Judge Sarah Dovrat concluded the the land in question had not been "assigned to the plaintiffs nor held by them under conditions required by law."

"Regardless of whether the land was Mawat or Miri, the complainants must still prove their rights to the land by proof of its registration in the Tabu," the judge said.

Judge Dovrat added that "athough the complainants believe that they have proof that they held the land for generations, and that four families from the el-Ukbi tribe cultivated and owned the land, such claims require a legitimate legal basis in accordance with the the relevant legislation and according to precedents set out in case law."

The judge held that the plaintiffs' documents indicated that they knew they had a duty to register land in the 'Tabu' - the Land Registry - but had not wanted to do so.

"The state said that although the complainants are not entitled to compensation, it has been willing to negotiate with them," the judge added. "It is a shame that these negotiations did not reach any agreement."

The court also ordered the Beduin complainants to pay legal costs of NIS 50,000.

Attorneys Michael Sfard and Carmel Pomerantz, who represented the Beduin complainants, slammed the ruling, which they said went against an international trend of recognizing the rights of indigenous peoples to their historic lands.

"In its ruling, the court affirmed the practice of expulsion that the state carried out against the Negev Beduin, and found that sixty years afterwards there is no point in testing whether that massive expropriation of lands was legal or not," Sfard said on Monday.

Sfard and Pomerantz added the the court did not "take the opportunity to recognize, even symbolically, the historical injustice perpetrated to the residents of these lands, whose ancestors lived there for centuries."

Professor Yiftachel called the decision "troubling" and said on Monday that the Beduin were considering whether to appeal to the Supreme Court.

"[The ruling] is troubling first and foremost because it unjustly dispossesses many Bedouins who have simply inherited the land from their ancestors. The court decided that just because they didn't register their land, they ought to lose it," Yiftachel said. "It's a sad irony - Jews who bought land from Bedouins in Northern Negev became recognized owners, while the people who sold them the land are now being dispossessed."

Yiftachel said that the court had ignored new research he presented, which he said showed the Beduins had "acquired rights within a permanent land system they developed and how previous regimes have respected those rights."

"Most researchers agree that 2-3 million dunams were cultivated by the Beduin in the early 20th century, which gives them land rights," he said. "Yet the court claimed that no Beduin settlement and rights existed then. Where did the Beduin farmers live - in mid air?"

Yiftachel added that recognizing the fact that Beduin did own parts of the Negev for generations was "not only a moral duty of any enlightened state, but also the key for good Arab-Jewish relations on which the Negev will depend for years to come."

"Whatever the court decision, I am committed to the truth," he said.

ILA director Benzi Lieberman welcomed the court's ruling, and said on Monday that the ILA expected the Beduin claimants to respect it and "stop trespassing" on the land.

"The ILA will do all in its power to keep state land from trespassers - and this includes farming - in order to safeguard the land," Lieberman said, adding that the ILA would file lawsuits against those who trespassed on state land.