Troubling questions for Rabbi Asher Lopatin, the congregants of Anshe Sholom, and all of us who give to JNF 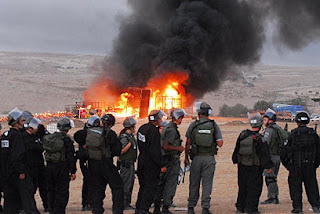 Many of you in Chicago and around the US know our old friend Rabbi Asher Lopatin, the Orthodox rabbi who leads Anshei Sholom, the shul where Rahm Emanuel, President Obama’s former chief of staff (and possibly the next Mayor of Chicago), and his family belong.

Rabbi Lopatin, who has been recognized as one of the top 25 pulpit rabbis in the US, announced that he is making aliyah with his family next year and bringing with him some 100 congregant families to Israel, to create a new “pluralistic, diverse and environmentally sound community” in the northern Negev near Beer Sheva.

But Rebecca Manski’s report - and the work of environmental justice pioneer Devorah Brous - uncovers facts that raise deeply troubling questions for Rabbi Lopatin and the hundreds of congregants he plans to lead to the Promised Land - and all of us who give to the JNF:

Dear Rabbi Lopatin and our friends at Anshe Sholom, how can you justify being party to this injustice? Is your conscience not troubled?

Does God not command us to “faithfully observe all My laws and all My regulations, lest the land to which I bring you to settle spew you out?” (Leviticus, 20:22)

Posted by Jewish Alliance for Change at 2:50 AM