An appeal to the Jewish people from Sheikh Siakh a-Turi 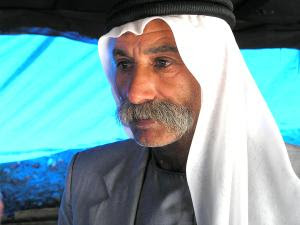 Sheikh Siakh a-Turi has been staying for the past 10 days at the cemetery of his village, el-Arakib with his son Aziz and his uncle Ismail. The unrecognized village of el-Arakib had already been demolished three times in the past two weeks - and more is expected to come. A restraining order prohibits him from being in the village with his family, who along with the rest of the villagers and with volunteers, are busy rebuilding the village. His following statement was recorded a few days ago.

I would like to say a few words to the entire Jewish people and to all the citizens of the State of Israel, Arabs and Jews. Take a good look at the acts which the state is committing against innocent citizens, and think of the future, about our life here, in good neighborly relations, one alongside another, a good life.

I ask you and all conscientious people in the State of Israel to get up and go out into the street and say "Let us all come together to tell the government: Enough! Stop abusing innocent citizens!" Demand that the Prime Minister and Foreign Minister Lieberman end the discrimination and shut down the activities of the "Green Unit", set up to fight the Bedouins, to expel us from our land. End the expropriation, so that we can tell our children to live here in peace and in brotherhood with the rest of the citizens.

The Bedouins are citizens of Israel. We want to live in dignity, we are not invaders.

These lands are not state lands. These lands are the lands of the tribes in el-Arakib, and those calling us "invaders" should answer the following question: Did the State of Israel bring along all these lands with it, when it was established, or were these lands here before its establishment?

I used to trust the courts, but I no longer do. I have been struggling through the court system for 12 years, and they are all against us: A man resides on his land - and he is an invader; if he presents a document to prove his ownership - it is a forged document.

They say: your documents, your [legal] traditions are worthless. But our documents are not just a piece of paper: our cemetery has been here since the Ottoman times; we have existent stone houses and water wells from the pre-1948 period, there are aerial photos from 1946... but all this is not enough. They only offer us one thing: agree to pay rent for residing on this land. How can I do so? If I do, I will be acknowledging that the land is not mine, that it belongs to the state!

And if I really am an invader - why are they offering me money as compensation for the land I am supposed to give up? They are offering an offending, meager sum of money, but the offer itself is due to the rights I have for this land. They are not offering me compensation because I am a nice Bedouin.

My second message goes out to governments of other states, to the Arab states too, and especially to states with ambassadors in Israel: The State of Israel is expropriating the lands of the Bedouins and planting trees on them, like the "Ambassador Forest". The state steals Bedouin lands, as if this is not being done for itself but in order to honor other states. Will you be part of this action?

There is also a third message, which I wish to deliver to older Jews, those who live in Israel:
Stand by the Bedouins. Stand by us, for we are suffering under this government, just like older Jewish citizens suffered in other states. We too have almost no one to stand by us and sympathize with us and say "Enough!" to all the government's wrongdoings. Only if Jews stand with us, hand in hand, can we stop these wrongs.

I sit here at the cemetery. A restraining order prevents me from joining the members of my household, my family, my friends, in my own village.

Click here to help the Jewish Alliance for Change publish the Israeli statement of conscience with the names of prominent Israeli and American Jewish signatories in American Jewish newspapers in major cities.

Posted by Jewish Alliance for Change at 2:46 AM