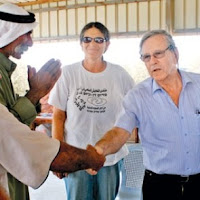 Oz is the latest public figure to voice solidarity with the residents of Al-Arakib, a town torn down 4 times in the last month in order to plant forests.

By Jack Khoury and Maya Sela

The unrecognized Bedouin village of Al-Arakib was demolished yesterday for the fourth time in three weeks.

In late July, all of the village's 40 homes were razed and hundreds of orchards were uprooted, in response to pressure from the Jewish National Fund to plant a new forest in the area. The residents, along with volunteers, worked to erect new structures and provide themselves with cover from the sun, only to have the new shacks torn down twice more - the last time on the last evening before Ramadan.

Author Amos Oz is the latest public figure to voice solidarity with the residents of Al-Arakib. Oz, who visited the village yesterday, described the situation of the Bedouin in the Negev as a "ticking time bomb."

"This includes both the unrecognized and recognized villages and towns," said Oz. "Tens of thousands of people live in inhumane conditions, without running water, without electricity, without jobs. The state doesn't provide the Bedouin people the most basic infrastructure it gives to its citizens. The village I visited this morning is the most radical example of a ticking time bomb."

Later in the day yesterday, the villagers held an improvised Ramadan dinner, which they billed as an alternative to the official meal hosted last night by President Shimon Peres. The Al-Arakib dinner was attended by Arab members of Knesset, local authority heads, and Muslim and Christian clergy members from across the country, as well as Jewish activists supporting the rights of the Bedouin in the Negev.

The sheikh of the village and the Negev Coexistence Forum sent a letter to Peres, calling on him to cancel his official dinner and dine with the newly homeless villagers.

"How do you expect anyone to honor your invitation to dinner when the State of Israel and the Israeli government disrespect the holiest month for Islam and order the eradication of an entire village during the fast itself?" the letter said. "This is an unprecedented act. Israel has never before demolished homes during Ramadan."

Last night some 40 people demonstrated in front of the President's Residence, banging drums and trying to interrupt the official Ramadan dinner. The protest was dispersed by police and four protesters were detained.

This coming Saturday, the Negev Coexistence Forum, Culture Guerrilla and Zochrot are organizing a protest in the village. Jewish and Arab poets are expected to arrive in Al-Arakib, where they will read poetry as an expression of solidarity with the village.

The Culture Guerrilla poets released a statement yesterday, saying they "strongly opposed uprooting citizens and replacing them with trees. We are launching a campaign to have the JNF forest cut at the root, and to replant the poetry of the Bedouin on the Negev hills."

This story is by:
Jack Khoury