Open Letter to a Policeman, by Amos Gvirtz 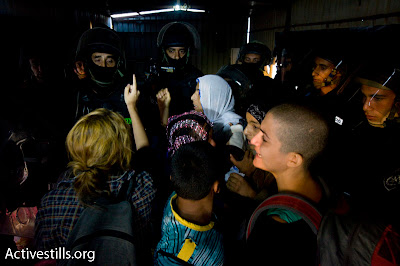 One of the ills of human society is crime. People experiencing theft, robbery, rape or assault hope that police would arrive on the scene of the crime to prevent it, apprehend the criminals and bring them to trial. Society cannot function without blocking the spread of crime. In a properly constituted state, it is the task of the police and of the policemen to give citizens a feeling of security in daily life.

In Israel, there is an entire community which lost most of its possessions and which lives under a constant threat of losing the few things remaining, losing the very roof overhead. Unlike most Israeli citizens, they have no one to whom they could turn to protect them from the criminal acts which blight their lives. It is not criminals nor lawbreakers who come to demolish their homes, destroy their crops and rob them of their last remaining lands. It is government representatives, accompanied by the police of the State of Israel, who are doing it! It is the government which sends its representatives to commit these acts, after having taken care to enact laws which would make them all legal. Crime authorized by law! It is no wonder that after nearly all their land was robbed from them, after their ability to earn a livelihood was so greatly diminished, there are so many criminals among them.

You are told that say the Bedouins in the unrecognized villages are violating the building laws. You are sent to enforce the law against these lawbreakers. Did you ever ask yourself how could an entire population, about 90,000 people, be lawbreakers? All of them lawbreakers? After all, it is well known that lawbreakers constitute a certain percentage in every society – they are never the whole, entire society. How is it possible that the entire Bedouin population of the unrecognized villages, in exercising the basic human right to shelter, is in violation of Israeli law? Can there be something problematic about the law itself?

The State of Israel evacuated entire Bedouin tribes from their land, while robbing these lands and taking them to itself. The Bedouins were settled in the area known as Sayag (the Reserve). Then, the government passed a law (The Planning and Construction Act of 1965) which defined the same Sayag Area as a `no-construction zone`. In this way, by means of a cynical, politically motivated law, the state made all the Bedouins into lawbreakers. Some of the Bedouin villages in the Sayag Area had existed there even before the State of Israel came into being. The state refuses to recognize these, either. By means of the political legislation, the state has made their inhabitants into criminals, too.

Many of the Jewish communities created in the Negev before the creation of Israel were established on land which the Zionist movement bought from Bedouins. But since the state came into being, it refuses to recognize the Bedouins` ownership of their lands. The state makes use of you – a police officer, a person entrusted with power to fight crime – in order to rob the Bedouin lands by brute force! Of course, the state has taken care to give it all a `legal` cover and pretext.

Try to imagine a situation – an utterly impossible one, I hope – that the Knesset would enact a law making robbery legal. I`m sure you would refuse to go on serving in a police force which is not committed to oppose banditry. But by means of its Planning and Construction Laws, the state has created a situation which makes it possible to rob with impunity the lands of the Bedouins! In the early 1950`s many Bedouin tribes were removed from their land – being promised that that this was temporary, and that they would be allowed to return after the army has used the land for a limited period of training. Instead, the state enacted the 1953 Acquisition of Land Act, by which the lands reverted to its ownership. Robbery, pure and simple! And after decades in which the state made no use of these lands, the Jewish National Fund is sent to plants woods on them, so as to prove that they are being used – and most importantly, keep their owners from returning to them. A Bedouin demanding to get back his land, who tries to cultivate them or return to live on them, is being punished. Destruction of crops, destruction of houses, destruction of villages – all are part of safeguarding the robbery! And you are being sent to enforce such laws!

I have heard that many of the police officers sent to destroy homes and villages do not carry the name tags on their uniforms. I`m sure they are ashamed of their acts, as they have a good reason to be! After all, they joined the police in order to fight crime, not in order to perpetrate it!

At the end of your work day you come home and proudly tell your family of apprehending criminals and wrongdoers! But what can you tell your parents on a day which you spent evicting other elderly people? What can you tell your wife and children when your day`s work had been to drive women and children from their homes and leave them homeless? Can you not perceive the horrible gap between a worthy job of protecting society from destructive criminals and destroying the fabric of daily life of living human beings, people whose only crime is being born Bedouin in the State of the Jews?

The Open Letter was written this week by Amos Gvirtz, member of Kibbutz Shefayim and a decades-long tireless activist for peace and justice.

Earlier this week, the police came back to the Bedouin village of Al-Arakib, northeast of Beersheva, to destroy it for the fifth consecutive time in the past two months. Later this week the police forces roamed all over the Negev, accompanied by heavy bulldozers and visited dozens villages many miles apart, destroying a house here and a house there. There was no obvious reason why the one house was destroyed and its neighbor spared - unless the goal was to intimidate as many people as possible, in all of the 'unrecognized' villages.

The Bedouin residents do not give up. They began immediately to rebuild their homes once again. Volunteers from all over the country arrived at Al-Arakib to help reconstruct it - for the sixth time. But the village is being built of wooden huts, which could easily be reconstructed after the next devastation , too.

There is no point in spending money and effort on real, solid houses, which would only fall victim to the bulldozers within a week or a month. Such homes are a luxury meant for the residents of Tel Aviv or Be`er Sheva, not for the Bedouin third- of fourth-class citizens scattered throughout the Negev.
Posted by Jewish Alliance for Change at 9:00 AM