Every Jew should see the Bedouin issue as test of Israel's moral values, by Rabbi Jonathan Wittenberg, Ha’aretz 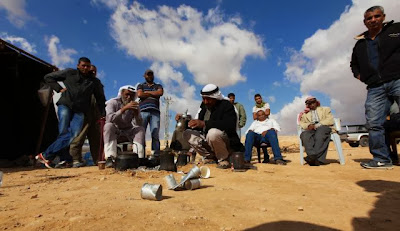 Why have the relocations and demolitions of Negev Bedouin homes, an issue not related to Israel’s security or vexed questions such as "Who is a Jew?", aroused such strong feelings amongst Diaspora Jews actively engaged with Israel?

Should the Begin-Prawer plan become law, it will have an enormous effect on Israel’s Bedouin, with tens of villages destroyed and tens of thousands of people removed from their homes into poverty-stricken townships. This will be extremely painful for Israel's supporters in the Diaspora to observe.

That is why the progress of the bill through the Knesset is making such an impact well beyond the Negev, in Israel and abroad. In Britain, sixty-five rabbis from across the denominations, supporting the courageous lead of Israel’s Rabbis for Human Rights, signed a letter to Prime Minister Benjamin Netanyahu and other senior ministers, asking them to re-consider their proposals. In the U.S., the Religious Action Centre of the Reform Movement, the Reconstructionist Rabbinical Association, T’ruah, the Rabbinic Call for Human Rights, and thousands of individual rabbis and Jews have written in a similar vein.

Why should this issue, which does not threaten Israel’s immediate security and has no influence over the vexed questions of ‘Who is a Jew?’ with its obvious Diaspora dimensions, have aroused such strong feelings amongst Jews actively engaged with Israel?

To some the slogan is ‘Israel, right or wrong’. To a few it is, sadly and unjustly, ‘Israel, usually wrong’. But for most of us, in spite of all the fears and frustrations, Israel remains the country where our Jewish values are, should and shall be realized. We still hope for and believe in the Israel whose founders, less than three years after the Holocaust, presented to the world the remarkable vision of a country which "will uphold the full social and political equality of all its citizens, without distinction of religion, race, or gender; will guarantee full freedom of worship, conscience, culture and education" and live and legislate according to "the precepts of liberty, justice and peace taught by the Prophets of Israel."

We know that, for all the daily difficulties the country encounters, this Israel is not just the stuff of dreams. Countless Israelis put into practice in their daily lives the values of justice and compassion. ‘That’s only a bubble’, someone recently told me. If so, it’s a big bubble or many bubbles. One has only to think of Israel’s extraordinary number of chesed organisations. To the outsider it can be hard to credit how many groups work across the painful divisions between Arab and Jew, Israeli and Palestinian and continue to affirm in spite of all the conflicts the core Jewish value of universal human dignity in the image of God.

That is why so many of us care when Israel threatens to pass a law so deeply at odds with its own principles. "So long as Israel claims to be a Jewish state, it must act according to Jewish moral values," commented Gidon Remba, Director of the U.S.-based Campaign for Bedouin-Jewish Justice. "The way a country treats its most disadvantaged citizens defines its moral character, and so too its Jewish character as a bearer of the Jewish moral tradition."

It’s not just that Diaspora Jews are pained by the prospect of watching on their national television Israeli bulldozers flattening villages and forcing thousands of men, women and children from their homes, actions which the Begin-Prawer plan could indeed entail. The matter goes deeper than the damage that would be done to Israel’s international reputation.

It relates to a profound moral instinct that Israel’s safety depends not only on military superiority and the skill and courage of its armed forces, but is connected in some unquantifiable way to its faithfulness to the age-old Jewish values of justice and human dignity.

It connects to those historical experiences of exile and persecution which Jews carry subliminally in their souls. As Theodore Bikel, who played Tevye in countless productions of Fiddler on the Roof, said, "What hurts is the fact that the very people who are telling them [the Bedouin] to “Get out” are the descendents of the people of Anatevka. My people."

I’ve been to El Arakib, demolished fifty times, spoken with its leaders and seen footage of its destruction. It was a shocking experience. "You mustn’t believe everything the Bedouin claim", I was told. Yet Bedouin land ownership was honoured by the Ottomans and the British, and pre-State aerial photographs document extensive Bedouin agriculture. There is much misinformation. A recent poll conducted by Panelresearch showed that 70% of Israelis thought on average that the Bedouin wanted forty per cent of the Negev. In fact, they are asking for just 5.4% of the area. When told this fact most Israelis felt the Bedouin claims were reasonable.

It’s beyond dispute that the situation of Israel’s Bedouin requires legislation. Their villages can’t remain unrecognised, without the provision of electricity and hygiene services other Israelis take for granted. After all, the Bedouin are full citizens and many have traditionally served in the IDF. What the thousands of voices from abroad and within Israel are asking for is a proper partnership between Israel and the Bedouin leadership in agreeing a solution. As Rabbi Jill Jacobs of T’ruah writes, "Demolishing homes, forcing people off their land, and denying basic government services contradict the moral values…on which the State of Israel was founded."

Surely the Knesset, and the Jewish community around the world, will not allow that to happen.

Jonathan Wittenberg is a rabbi of the New North London Synagogue and has strong family, communal and charitable connections with Israel.

Posted by Jewish Alliance for Change at 7:01 AM