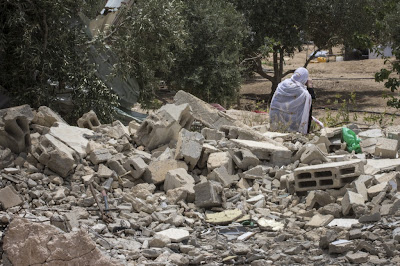 A Ma’an reporter said the clashes erupted as Israeli forces demolished three houses in the village which is “unrecognized” by the Israeli authorities. The houses belong to the Abu Skeik family.

As the owners tried to prevent the demolitions, Israeli officers fired stun grenades, tear-gas canisters and plastic-coated bullets. As a result, five were injured including children and a pregnant woman.

Israeli police patrols escorted bulldozers affiliated with the so-called land department [the Israel Land Administration] which arrived at the village to finish demolishing three structures. A day earlier the owners had started demolishing the homes after receiving orders from Israeli authorities.

BEERSHEBA (Ma'an) -- Israeli forces on Thursday demolished 11 structures and tents belonging to Palestinian Bedouins in a Negev village for the second time in two weeks.

The structures had been rebuilt after Israeli forces demolished them on May 16.

One of the residents whose home was demolished, Shihdeh Abu al-Qiean, said an Israeli officer told him: "Beware there are no media outlets here."

Another resident, Ratib al-Qiean, told Ma'an: "We will never leave this land even if they demolish our houses 100 times. We will live in tents until God says the final word."

He said Israel demolished 11 tents and steel homes, uprooted several trees and confiscated a power generator and agricultural equipment. "All the wreckage was loaded in lorries in order to hide all evidence of the crime," he added.

Talal Abu Ara, a Palestinian member of Israel's Knesset, visited the village and said the demolition was a "crime against humanity."

Abu Arar and fellow Palestinian MKs Ibrahim Sarsour, Ahmad Tibi and Masood Ghanayim joined dozens of Negev Bedouins in a demonstration in front of Israel's Knesset on Monday to protest the forced displacement of nearly 40,000 Bedouins.

Abu Arar, who is leading a campaign to protect Negev Bedouins, appealed to "rational Israeli officials" to halt implementation of the Prawer-Begin plan, which he called a "racist, apartheid law."

Bedouins "are not immigrants from a foreign country, but indigenous owners of the land," he added.

In early May, Israel's Ministerial Committee on Legislation approved a bill which outlines a framework for implementing the Prawer-Begin plan.

The plan will forcibly evict nearly 40,000 Bedouins and destroy their communal and social fabric, condemning them to a future of poverty and unemployment, the Association for Civil Rights in Israel says.

The Israeli state denies them access to basic services and infrastructure, such as electricity and running water, and refuses to place them under municipal jurisdiction.

Posted by Jewish Alliance for Change at 6:17 AM