Neglect at Schools Spurs Strike by Parents in Bedouin communities, by Yanir Yagna, in Haaretz 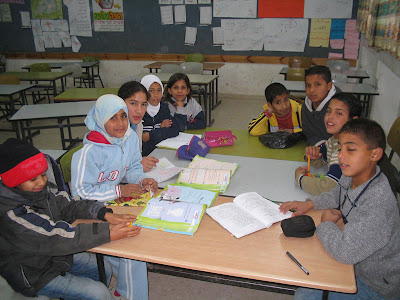 Parent-initiated strikes are paralyzing schools and kindergartens in two different Bedouin communities in the Negev. The strikes are in protest of long-standing neglect of equipment and poor sanitation and safety conditions.

Photograph from Step Forward, an NGO with the objective of promoting
educational opportunities and economic advancement programs for
the Bedouin community of Southern Israel.

“The games are old and dirty and the chairs are broken,” says Mussa Abu Bina of the El Azazme committee. “The kids can’t be in the kindergarten because of the noise of the generator. The sand boxes are filthy, some of the playground facilities are unsafe, the toilets are broken, and we lack basic equipment such as drawing paper and markers.”

Some parents told Haaretz: “The Education Ministry claims it doesn’t have money to help the communities, and refer us to the Abu Basma regional council. They, in turn, refer us back to the ministry.”

The regional council’s acting chairman, Rahamim Yona, replies that, “We’re doing our best to solve the problem but we lack budgets. We reported the problem to the Education Ministry a year ago.”

The situation in Lakiya is similar, claims Mer’i al-Sana, of the parents’ committee there: “All the schools are in the same dire conditions because we never received the basic financial support given to other educational institutions. It’s inconceivable that kindergarten teachers pay for cleaning materials from their meager salaries, because there are no funds. Last week the school children didn’t receive their report cards because the school hasn’t had a budget for paper. There are 18 air-conditioners in the junior high school but none of them work. There even isn’t enough money to fix broken windows.”

Nir Shmueli, deputy director of the Education Ministry in the south, counters that the ministry ordered the Abu Basma regional council to buy equipment for the kindergartens, and that the problem in Azazme would be solved “within a week.” As for the situation in Lakiya, the ministry did not comment by press time.

Email ThisBlogThis!Share to TwitterShare to FacebookShare to Pinterest
Labels: discrimination