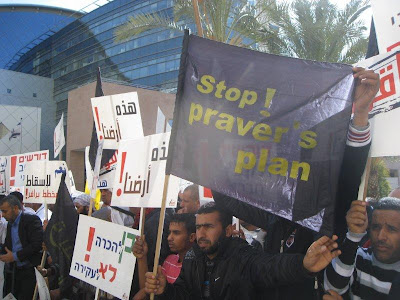 A new bill seeks to turn the controversial Prawer Plan into Israeli law. If the Knesset passes the legislation, it will pave the way for Israel to step up its efforts to disposess the Negev's Bedouin and relocate them to impoverished townships. This bill has gone totally ignored by both local and international media.

On January 3rd the Government of Israel published the memorandum of a bill named "Regulation of the Bedouin settlement in the Negev", which states the steps to be implemented in order to relocate the overwhelming majority of the residents of the Negev's unrecognized villages and to confiscate about two-thirds of the land remaining in their possession.

As can be expected, the Government of Israel is anticipating resistance to this new bill, so within the bill are violent measures to ensure its implementation. This bill is currently going through the legislative process in the Knesset, and will likely become law soon.

We call all our friends to help us prevent the Knesset and government from passing this disastrous bill.

Following is a short history bringing us up to this legislature, then a short description of the bill, with a highlight on its most dangerous aspects.

(The memorandum can be found at this address (Hebrew only): http://www.tazkirim.gov.il/Tazkirim_Attachments/41151_x_AttachFile.doc)

Coerced urbanization: Israel has had destructive policies towards its Bedouin minority for decades. The results of these policies are seven Bedouin towns, which are always rated as the poorest municipalities in Israel, with severe social breakdown, harsh unemployment, and the absence of any traditional or modern positive roles for the women in the communities. Israel created these towns with willful disregard for the traditions and the needs of the community, rather with the lone aim of minimizing the land available for the use of the community. Over the last half century Israel has managed to "settle" half the Bedouin community in these failed towns.

Policies of non-recognition: The other half of the Bedouin community has been adamant in holding on to its traditional lands and culture and the government has made them pay a steep price by withholding basic services and infrastructure through the policies of non-recognition. Forty-five villages, of 1,000 -10,000 residents each, are not recognized, making the people live without roads, no connection to the electric grid, no running water or sewer system, very minimal health and education systems, and worst of all – no administrative system by which to request building permits, rendering all the homes "illegal" and therefore slotted for demolition.

For comparison sake: the Jewish farmers in the Negev are using 1,000,000 dunams of land for agriculture, the Bedouin are currently using about 195,000 dunams, and this will be reduced by the new bill to close to zero. On the other hand – there are more people that make a living as farmers in the Bedouin community than among the Jews of the Negev. Needless to say the new bill will bring the Bedouin community to be even poorer and more dependent on governmental handouts than it is already; accordingly this will further decimate the community.

The policy starts with a call to all Bedouins to ratify their land claims, if their father or grandfather filed a land claim in the procedure the Government of Israel initiated in the 1970's. Then the conditions of the land holdings are examined by the government: Did the ancestor utilize the land during the 70's?/ Is the land utilized by the descendent today?/ Have all siblings and cousins ratified their land claim?/ And some more conditions. If all conditions are met – then the person will receive a promise from the government to receive a land parcel up to half the size of the land claim he/ she is giving up. However the government will keep its promise only if the Bedouin person will clean off the land they are using now of all buildings, people, animals and trees at the demand of the government, and the land parcel will be allocated only at a location the government will decide on in the future.

The threats the bill poses for the Bedouin community:

Its aim is land confiscation: As stated earlier, this bill further reduces the availability of the land, an important resource for the residents of the Bedouin villages, who still mainly live by farming. This is further disturbing as the Bedouin are recognized by the U.N. as an indigenous people, and thus deserving of land (and other) compensation – not land confiscation.

Extra Power to Governing Bodies: Articles #71-#73 permit the Authority for the Settlement of the Bedouin (after a formal claim by the Prime Minister), to render a certain area to be cleared out immediately, and demolish all buildings and evacuate all people, without the necessity for a court injunction, as is the law today. Further the bill states that the courts have very limited possibility in preventing this process from being carried out. All the Bedouin villages are to go through this process.

Unwarranted Creation of Family Strife: Articles #42-#43 state that the percentage of the land that a person will receive as compensation depends on the percentage of the original land claim that has been ratified. In plain language what this means is – if all cousins (the grandfather being the original land claimer) enter the process this bill suggests, then (if all other criteria are met) all can receive compensation in land (which is strongly preferred to monetary compensation) of up to 50% of the size of their personal land claim. However if some choose not to enter the process, then the other cousins will receive less land as compensation. This is set by the bill to create family pressure on the descendants of the original land claimer to enter the process and officially forgo their land claims. The end result will be the creation of family strife among most Bedouin families in the Negev, strife that will probably continue on for generations, destroying even further the strained social fabric already decimated by forced urbanization and dislocation. It is unimaginable that a government will pass a bill that is so destructive to family life, all for the purpose of forcing people to forgo some more of their historical claims to land.

Diminished protection by the courts: The bill also prescribes that in cases of conflict with other laws, it is above other existing laws in Israel, reducing further the possibility for members of the Bedouin community to turn to the courts for protection.

Another blatant racist ruling in this bill is that Bedouin may not receive land compensation and may not settle west of route #40, but rather within a clearly delineated area, mapped in the bill, which is clearly reminiscent of a reservation or a "Bantustan".

No allowance for settlement planning: Furthermore, the bill does not include any discussion or procedures for recognition of villages, processes for planning the villages, or possibilities for people of the community to make choices as to where they may live, and the character of their communities. So when the clearing process described in articles 71-73 comes into effect, the government will be the sole decider of the new locations for tens of thousands of people.

Impeded process of consideration: The government has nominated Minister Beni Begin to listen to the grievances of the Bedouin men, and to implement change in the bill according to the needs and wishes of the Bedouin community. However, we have heard Minister Begin's talks, and unfortunately we find that he has no real ability or wish to listen to members of the Bedouin community. Rather, we find him frustratingly eloquent and an emissary of the government in convincing members of our community to enter this destructive bill.

Implementation of this bill will create severe suffering: We do not believe this bill can be implemented, as its aim – further reducing the ability to hold on to what is left of the Bedouin ancestral lands – is an abomination for members of the Bedouin community. However, if this bill passes, and if there is an attempt to implement this bill, the Bedouin community will suffer greatly: with bulldozers razing villages to the ground, land confiscated by force, many incarcerated because of their refusal to give up their lands, and possibly the eventual success of the bill – total urbanization and loss of land as a source of income to the Bedouin people, and the destruction of their culture.

Thousands of Bedouin have demonstrated in Beer Sheva and in Jerusalem, showing their abhorrence to this bill. The Israeli media, cooperating with the government, completely ignored these demonstrations.

Posted by Jewish Alliance for Change at 2:16 PM