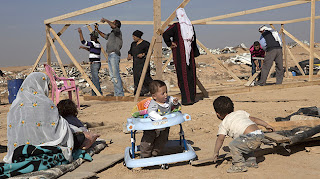 The new trend: seemingly innocuous, nature-oriented bodies in Jerusalem shedding their bark, so to speak, and revealing their true identities as expert-action-arms for the agenda of the settler movement.

First, we have the JNF-KKL, which, apart from its leadership in the campaign to demolish Bedouin villages in the Negev, has recently been exposed as seeking to evict Palestinian families from their homes in East Jerusalem.

Following an international outcry, including the resignation of one of the JNF's Board members in the U.S. in protest of his former organization's actions the JNF's actions in East Jerusalem are frozen, for now. There is little doubt that they'll be back in action soon, though, dear justice-oriented reader, so keep your eyes peeled around Tu B'shvat, a festival of trees (which I really like, when its not being used to perpetrate political injustices) that falls in early February this year, wherein the JNF will certainly seek out some Bedouin village on which to plant more trees. In fact, just yesterday the JNF-KKL reestablished up a "work station" brimming with bulldozers next to Al-Arakib, a Bedouin village in the Negev that has been demolished 30-some times already.

The Israel Nature and Parks Authority has a new plan, called the "Slopes of Mount Scopus National Park," which, if carried out, will result in the confiscation of private Palestinian land and a territorial connection formed between the Old City of Jerusalem and the West Bank settlement area of E1, near Ma'ale Adumim.

For more background on this case, see this blog post on +972 magazine by Solidarity's Zvi Beninga, and this more detailed background prepared by Bimkom, an Israeli planning rights organization, and the following letter prepared by the Solidarity Movement. For a report on how this process of political manipulation of archaeology is not a unique to this case but rather is quite systematic in Jerusalem, see Emek Shaveh's report, "Where Are the Antiquities?"

This park is not only unfair to the residents of A-Tur and Issawiya whose only wrongdoing was being born Palestinian in Jerusalem, but it also has potentially dramatic political ramifications:

The "Slopes of Mount Scopus" park is strategically located such that it will create Israeli territorial continuity between the Old City and the area known as E1, around the settlement of Ma'ale Adumim.

Construction in E1 has been opposed by the U.S. government -- both under Obama and Bush: In October 2005, then-Secretary of State Condoleezza Rice stated: "We have told the Israelis in no uncertain terms that [settlement in the E1 area] would contravene American policy." Building a "national park" that connects to E1 is the Israeli government's ill-disguised attempt to circumvent clear-cut American opposition to settlement in E1. It is apparent, however, that the goals of this park are political and not ecological.

The residents of Issawiya and A-Tur are not sitting by idly, though. Last Friday, almost 100 residents of Isswayia and Israeli activists organized by the Solidarity Movement took matters into their own hands, literally, and began to break down, with shovels and open palms, the mound of dirt and rubble that the INPA created last week, after it destroyed a road in Issawiya, to block residents from driving where the road once was (video of this nonviolent act of civil disobedience here).

Meanwhile, a broad coalition of Israeli organizations, including the Solidarity Movement, Bimkom, Emek Shaveh, Ir Amim, Rabbis for Human Rights, Combatants for Peace and more have been working with Palestinian partners and activists in Issawiya and A-Tur in order to seek to prevent this "national park."

The campaigns to stop the JNF from evicting families and destroying villages, and to cancel the INPA's planned park in the middle of East Jerusalem are ongoing, and the more international attention they get, the better the chances for success. E1 still remains largely empty because of American governmental pressure, and the Sumarin family in Silwan still remains in their home largely because of grassroots efforts.

Next time on Trees n' Settlements: the Israel Center for Watching Extremely Rare Birds lays out its plans a new bird sanctuary in the Palestinian neighborhood of Sheikh Jarrah.