Sign the Open Letter to the Jewish National Fund: Equal rights, sustainability, and development for Israel’s Negev – not dispossession of the Bedouin! 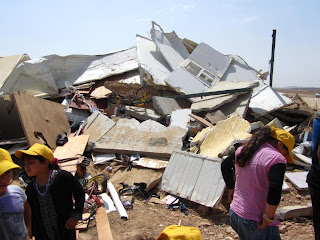 As residents of the Negev, human rights activists, social organizations in Israel, Jewish and other allies in the United States and around the world, we issue this call to you, the leadership of the Jewish National Fund (JNF), as you assemble for JNF’s Annual Conference in Atlanta, together with Israeli cabinet ministers, the mayor of Jerusalem, and others involved in various projects in the Negev, some involving JNF and others sponsored by it. No doubt, JNF presumes to be speaking for all the residents of the entire Negev during this conference. But the facts suggest otherwise.

In 2005, JNF-USA, together with JNF-Israel, the Or Movement, Ayalim and the government of Israel, launched a program for developing the Negev, announcing that it will be placing the Negev at the center of its activities in Israel. JNF has since become the major contributor to various development projects in the region. The program set an ambitious demographic target: between the years 2005-2010 the Jewish population of the Negev was to be increased by 500,000. When this goal was not met, a more modest target was set: to increase the Jewish population of the Negev by 250,000 by 2013. But neither of the two targets were formulated in democratic consultation with the current residents of the Negev.

To implement its plan, JNF is using two complementary strategies:

The first strategy has yielded few results. By contrast, the forestation efforts of the JNF have been more successful. JNF is planting trees on thousands of acres of land – much of it not empty, but containing Bedouin villages, many with ongoing legal claims of Bedouin ownership.

Two of many examples illustrate the systematic pattern of JNF action:

First, the village of Twail Abu Jarwal, located in the heart of Givoth Goral (“Destiny Hills”), was destroyed some fifty times over the past four years to make room for a JNF forest already underway.

Second, the village of Al-Arakib, north of Beer Sheba, which recently made headlines, is situated in the heart of the “Ambassadors Forest,” an area in which the JNF conducted massive forestation until mid-May 2010. Since the end of July 2010, the village has been destroyed five times – once during the month of the Ramadan fast.

In this case, too, JNF is cooperating with the government of Israel as it dispossesses the people of the Al-Touri tribe living there—the same Bedouin tribe originally expelled from the site during the 1950’s—by completely afforesting the area so that they can no longer return to their lands. Following repeated home demolitions, hundreds of villagers, men, women and children, are currently living in makeshift open tents and huts, exposed to the extreme heat of the day, and the soon approaching winter.

JNF has completed all its work surrounding the village of Al-Arakib and is awaiting its final evacuation. At the same time, Awjan, an area of small hamlets and agricultural farms in the southern part of Givoth Goral, may be the next target for dispossession and expulsion.

JNF has filed a publicly available plan for forestation which completely ignores the existence of Awjan and other “unrecognized” Bedouin villages in the area to be blanketed with trees. Detailed objections to the JNF plan have been submitted to Israel’s Ministry of Interior by human rights organizations.

The Bedouin, the indigenous inhabitants of the Negev, comprising nearly 30% of the region’s population, are being forced to pay the price of JNF activities in the Negev. That the JNF does not itself engage in the government’s demolition and expulsion activity, or decide the legal status of villages, is no defense. The JNF must not serve as an accomplice to the discriminatory policy of the Government of Israel and the Israel Land Administration (ILA) – the dispossession of the Bedouin from their land.

We call on you, the JNF leadership, to reconsider JNF’s development plans for the Negev and to commit, henceforth, to working toward truly sustainable development of the Negev for ALL its inhabitants, Jews and Arabs alike.

We call on you to:

Bedouin villages should be able to find their place in a Negev that also includes forests and tourist sites, within the framework of true environmental planning, involving the Bedouin in determining their own future.

By ensuring that all Israelis can feel confident that their basic rights and culture will be treated with respect by the society in which they live, the State of Israel can build a foundation for trust and partnership with its non-Jewish minorities.

Atlanta is the place to do real soul searching, to end JNF’s role as an accessory to acts of robbery and looting, green-washed by false notions of sustainability. True sustainability is not about one national or ethnic group living at the expense of another. It does not mean doing injustice to one for the benefit of another; nor does it involve the exploitation of the limited resources of indigenous peoples living in the State of Israel. Rather, sustainability is about sharing resources equitably; otherwise, it becomes a fig leaf for entrenching ethnic discrimination.

If you, the leaders of the JNF, fail to heed this call, you will bear responsibility for the betrayal of Israel’s commitment to the values of equality and justice enshrined in its Declaration of Independence, to which the state is obligated by the international conventions it has signed.

If you fail to reevaluate the JNF’s course, you risk embroiling the State of Israel in a war against its own citizens—the Arab population of the Negev—igniting a conflagration that may not easily be extinguished.

We call on you, the leadership of the JNF, to end your complicity in the destruction of Bedouin villages in the Negev and in the dispossession of Israel’s Bedouin community.

Signed by 28 NGOs, human rights organizations and social movements from the Negev and Israel and by 8 American Jewish organizations.

Posted by Jewish Alliance for Change at 12:59 PM