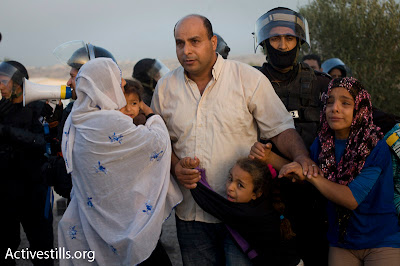 Click here to help Rabbis for Human Rights-North America and the Jewish Alliance for Change distribute this Israeli statement of conscience in the American Jewish media with the names of prominent Israeli and American Jewish signatories.

A horror show as brutal as the one that took place in the Bedouin village of the Al-Touri family in Al-Arakib, in which no less than 1,500 police, special forces and mounted police entered the village armed to the teeth as though setting out to fight the bitterest of enemies, has not taken place since Land Day in 1976 and the events of October 2000.

All these forces with government and Jewish National Fund (JNF) bulldozers arrived at the village to uproot 300 residents, young and old, and raze their homes to the ground - all to plant a JNF forest on their land. Since then they have repeated the spectacle some twenty times, in recent days and weeks with vicious beatings and shooting of Bedouin children, women and men, causing some to be hospitalized.

Even if it is true that they came with legally signed orders, it is no less true that the Bedouin residents and the Israeli government are locked in a dispute over ownership of the land. This is not the way to settle a dispute that is still under deliberation in the courts. The Bedouin residents have documents and proof of their traditional rights to the land and of their residence there for hundreds of years, from the time of the Ottoman Empire and the British Mandate, prior to the establishment of the state of Israel.

The government has enacted discriminatory laws against the Bedouin Arab population in Israel, and by way of those laws expelled them from their villages, relocated them, robbed them of their lands and transferred ownership of those lands to the state.

The arbitrary policy of demolishing homes is meant to sow fear in the residents so that they will leave their villages and give up their right to live on their land. This policy violates the basic rights to shelter, to life, and to well-being, rights which the state ensures for the Jewish population in Israel, but ignores with regard to the Arab population. The right to housing is anchored in international law, particularly in treaties on social, economic and cultural rights that Israel has signed and ratified.

Insistence on the laws that the government has enacted in opposition to these treaties is malevolent, foolish and short-sighted. Rather than coming to a mutually acceptable agreement with the Bedouin Arab community on ownership of the land and on the type of settlement it prefers, the government holds fast to its intention of concentrating all the Bedouin in yet another crowded township, plagued with unemployment and neglect in every area of life.

Nothing like this exists in any other Western country: that so great a number of tax-paying citizens are denied their basic rights to water, electricity, infrastructure, health services and education as are denied to the 90,000 Bedouin citizens of the state of Israel who live in 45 unrecognized villages in the Negev.

With a modicum of effort, fairness, goodwill, and an understanding of the needs of the Bedouin community, it is possible to arrive at a mutually acceptable agreement on the issues in dispute that will benefit all the residents and communities of the Negev. Prolonging or unilaterally forcing the situation holds genuine danger for all the residents of the Negev, Jews and Arabs alike.

It is unthinkable that the State of Israel encourages and invests in settlements of every kind for Jews in the Negev, including single-family farms rich in acreage and public resources, while ignoring the needs of the Bedouin community and its future development, in flagrant violation of the principle of equality and the vision of Israel's Declaration of Independence.

Before the situation gets worse, before calamity strikes, we call on the Government of Israel and the JNF to stop, to rethink their policy and to arrive at an agreed solution with the Bedouin Arabs in the Negev.

Watch this space for the list of lead American Jewish signatories to be added soon.

NGO’s who contributed to the publication of this ad in Ha'aretz are: The Coalition against Racism in Israel, Shatil, Coalition of Women for Peace, Negev Coexistence Forum for Civil Equality, Recognition Forum.

Please help Rabbis for Human Rights-North America and the Jewish Alliance for Change distribute this Israeli statement of conscience with the names of prominent Israeli and American Jewish signatories in the American Jewish media.

We'll reach hundreds of thousands of American Jews, urging them to stand shoulder to shoulder with our partners who are working on the ground in the Negev, in the courts and in the halls of government for a truly just and democratic Israel, fulfilling the vision of Israel's founders.

American Jewish and Christian fundamentalist donors are putting their dollars to work to build support for an intolerant, xenophobic Israel that will fulfill their ultra-nationalist vision of a Jewish state.

Together, we can strengthen the forces in Israel working for Jewish-Arab coexistence and equality in the Negev in a truly democratic Jewish state. With your help, we can make a difference.