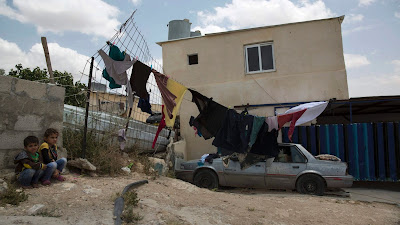 Acknowledging that the chances of obtaining legal redress are slim, opponents of the eviction are planning for a public struggle.

The residents of the unrecognized Bedouin village Umm al-Hiran on Monday petitioned the Supreme Court for another hearing, following its previous ruling that they could be evacuated and the village demolished to make way for the construction of a Jewish community, named Hiran.

The residents, who are represented by the legal aid NGO Adalah, argued in their petition that last month’s ruling constituted a “new and historic law,” requiring another hearing before an expanded Supreme Court bench.

In terms of the “new and historic law,” according to the petition states, “the state may, as owner of the land, instruct that the residents be evacuated at any time it wants, even if the state itself gave them permission to use the land and live there, as it gave the residents of Umm al-Hiran.”

In so doing, according to the petition, the state “utterly ignored the lengthy period of time the citizens lived on the land,” and made it impossible for them to protect themselves constitutionally.

“The state is the owner of the disputed land, which was registered to it in the framework of an arrangement process,” Supreme Court Justice Elyakim Rubinstein wrote in the verdict that has been challenged by Umm al-Hiram residents. “The residents did not buy the right to the land but rather lived on it for free with permission, which has been legally abrogated by the state. Under such circumstances there is no justification for the intervention of the courts in previous verdicts.”

Justice Daphne Barak-Erez, who did not accept Rubinstein’s decision in its entirety, was critical of the state’s actions. “The petitioners cannot receive all the redress they seek, but we cannot accept the faults in the actions of the authorities regarding the decision on evacuation and compensation,” she said.

“It has been noted that the petitioners were authorized to live in the place for some 60 years and the fact that the state insists that the new settlement is not restricted and is open to every person, including the petitioners themselves should they want to [live there.] Thus, for example, the state can consider the possibility, besides moving them to Hura [another Negev Bedouin town], of providing them with lots in the new community of Hiran.”

Adalah acknowledges that the chances of legal success are slim and intends focusing its main effort on a public struggle. In a petition published by the Umbrella Organization of Human Rights and Social Organizations in Israel, the evacuation was defined as an “unjust, racist and discriminatory step.”

The steering committee of the Higher Arab Monitoring Committee announced that thousands of residents of the unrecognized villages in the Negev would come to Be’er Sheva next Thursday to protest against the house demolitions. The intention is to march from market square to the government buildings.

Another protest against house demolitions will be held at the entrance to the Arab city of Umm al-Fahm in Wadi Ara this evening.

Posted by Jewish Alliance for Change at 1:21 PM