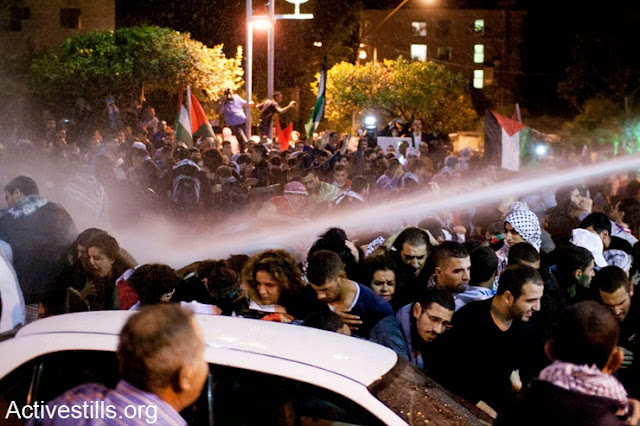 Protest Scenes: Bedouins flee from a protest after Israelis fire tear gas into the crowd.

Hundreds of Bedouin Arabs and their supporters clashed with Israeli forces on Saturday in protests against a government plan to force 40,000 Bedouins living in the southern Negev region to leave their villages.

The plan has not only angered the Bedouins but also spurred many other young Arab citizens of Israel to associate it with Israel’s occupation of Arab East Jerusalem and the West Bank, and so identify themselves more closely with demands for a Palestinian state.

The historic heart of Haifa, Israel’s northern port city on the Mediterranean, was brought to a standstill as hundreds of Israeli Arabs scuffled with scores of security forces.

Police fired stun grenades and water cannon at the youths, who blocked a main thoroughfare and chanted: “With our souls and blood we will defend you, Palestine!”

Over 1,000 demonstrated in the largest gathering, in Hura, in Israel’s Negev Desert. Stone-throwers clashed with police, who used tear gas, stun grenades and water cannon.

Eyewitnesses said several demonstrators had been injured. An Israeli police spokesman said at least 28 people had been arrested in Haifa and Hura and some 15 officers treated for injuries.

A bill set for a final vote in parliament before the end of the year provides for 40,000 Arab Bedouins from many villages that are “unrecognised” by the Israeli state to be forced to move into seven townships.

“We were here before Israel. What they’re doing in the Negev is what they’ve done to us all along,” Haneen Zoabi, an Arab member of parliament, told Reuters at the Haifa protest.

“It may pass a vote, but the youth here and in the Negev will resist democratically in any way possible, and stop them.”

Other demonstrations took place near the old city of Arab East Jerusalem, another Arab town in central Israel and an area adjoining a Jewish settlement in the West Bank, where tear gas was used to scatter protesters.

“The attempts of a boisterous and violent minority to deny a better future for a large population are grave. We will continue to promote this law for the better future that it will provide for all the Negev’s citizens,” Netanyahu said.

Israel says it will compensate many of the Bedouins with a combination of land and cash, and “bring them into the 21st century” by significantly improving their standard of living, according to a government-sponsored report on the draft.

The majority of Israel’s 1.6 million Arab citizens dwell in cities and small towns in the north and centre.

But 200,000 Bedouin live in the southern desert, half in government-built townships and half in 42 ramshackle “unrecognised” villages without running water, electricity or sanitation. Civil rights groups say it is these the government should be developing, rather than the soulless dormitory towns where the Bedouins are being forced to move.

The government agency in charge of the Prawer Plan, based in the prime minister’s office, condemned the protests.

“Extremists, many of whom are not Bedouin, chose to divert the open debate about a purely social and humanitarian cause into a confrontation, falsely linked to the Palestinian issue,” it said in a statement.

“The Bedouin of the Negev, being equal citizens, deserve adequate housing, public services and a better future for their children.”

But Medhat Diab, a young Arab activist from a town outside Haifa wearing the trademark Palestinian chequered scarf, said the Bedouin and Palestinian causes were linked.

“Our ID says we’re Israeli but our identity is Palestinian,” he said. “My generation sees that there’s no justice or equality for Arabs, just taking more and more of our land.”

Posted by Jewish Alliance for Change at 7:49 AM