Israeli govt to decide on plan to evict up to 40,000 Negev Bedouin from their homes 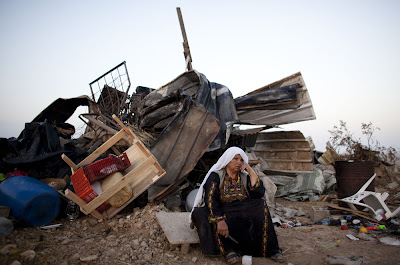 The Israel Government will soon vote on whether to proceed with a plan (the Prawer Plan) that could result in the forcible eviction of 30,000 - 40,000 Negev Bedouin from their homes and the demolition of their villages, a gross violation of the civil and human rights of Israel's Bedouin citizens.    If the Netanyahu government decides to move forward with this plan, they will submit a bill to the Knesset to enact it into law.   Our friends at ACRI (the Association for Civil Rights in Israel) provided this update.

The bill suggests an arrangement whereby the registration of land claims takes place within a specified time; recognition will be given for only a percentage of the claims and financial compensation will be provided for land recognized by the arrangement.

Our main reservations regarding this proposed law are:
According to our position, an equitable and just solution requires firstly recognizing that the residents of the unrecognized villages are citizens with equal rights. The government must recognize the 35 currently unrecognized villages, and institute a fair mechanism for investigating and determining land ownership claims, in which the historical affiliations of the Bedouin citizens to their land are considered.

Posted by Jewish Alliance for Change at 3:49 PM