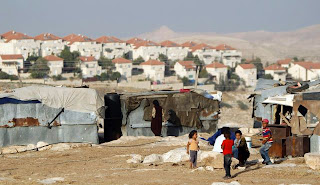 The European Parliament passed a resolution on Thursday condemning Israel's policy toward the Bedouin communities living in unrecognized settlements in the Negev Desert. Human rights groups have called the resolution, which passed 291 to 274 with 39 abstaining, unprecedented.

The European Parliament called on Israel to withdraw its government-approved Prawer plan to regulate the Bedouin communities in the Negev. The resolution was brought to a vote by the Group of the Progressive Alliance of Socialists & Democrats in the European Parliament and was based on work done by the European Parliament's Working Group on the Middle East, which held consultations with representatives of human rights groups including Attorney Suhad Bishara of Adalah - The Legal Center for the Arab Minority Rights in Israel, who briefed working group on the legal ramifications of the plan, and its relations to Israeli and international law.

The situation of the Bedouin citizens of Israel has never before been addressed by the European Parliament. The Director of Adalah’s Negev bureau, the geographer Dr. Thabet Abu Rass commented on the decision saying that “achieving recognition by the European Parliament that the Israeli government practices the same policies of displacement and dispossession against Palestinian citizens of Israel as it does against Palestinians living under occupation is a tremendous step forward.”

Last march, the UN Committee on the Elimination of Racial Discrimination called on Israel not to implement the Prawer program.

"Whereas Arab Bedouins are indigenous people leading a sedentary and traditionally agricultural life on their ancestral lands and are seeking formal and permanent recognition of their unique situation and status," The resolution stated. "whereas Arab Bedouin communities, threatened by Israeli policies undermining their livelihoods and including forced transfer, are a particularly vulnerable population both in the occupied Palestinian Territory and in the Negev."

In another relevant clause the resolution said: "The European Parliament Calls for the protection of the Bedouin communities of the West Bank and in the Negev, and for their rights to be fully respected by the Israeli authorities, and condemns any violations (e.g. house demolitions, forced displacements, public service limitations); calls also, in this context, for the withdrawal of the Prawer Plan by the Israeli Government."