Bedouin Land and Culture Threatened by Israel's Plans for Resettlement, by Phoebe Greenwood, in The Guardian 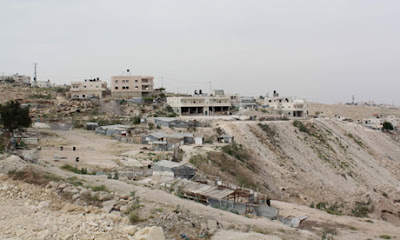 A stench of rubbish wafts over the Palestinian town of As Sawahira from the al-Abdali dump. The vast tip sprawls over an excavated hillside on the outskirts of the town and receives a constant stream of trucks carrying waste from nearby Jerusalem.

Israeli authorities are proposing to relocate 2,300 Bedouins from the surrounding hills to this site as part of their push to resolve "the Bedouin problem". Simultaneously, plans are proceeding through the Israeli parliament this month to move a further 90,000 Bedouin from their ancestral land in the Negev desert in Israel's south to government-planned townships.

The Israeli administration argues that a move to purpose-built communities will lift the indigenous population from unacceptable depths of poverty. Across Israeli-controlled territory, Bedouin communities argue that their culture, along with centuries-old ties to land, is being swept aside to make way for Jewish expansion.
Around 250 Bedouins from the Jahalin group already live on the fringes of the As Sawahira dump, moved here by the Israeli authorities 15 years ago from land now occupied by the Ma'ale Adumim settlement. Their modest homes and huts are overlooked by piles of rubbish on one side and the Kfar Adumim settlement on the other.

"I'm sure the dump is very damaging for our health, but the Israelis moved us here – we had no choice," says Abu Jahalin, 70. He has heard of the plans to move thousands more Bedouins to the dump. He points to the proposed site with his walking stick, explaining that it will run all the way from the top of the hill, where his sheep graze, to the piles of rubbish.

Abu Jahalin says there is not enough land to feed the animals already here: "They [the Israelis] will wall off the whole area so there will be nowhere for us to graze our animals. I'll probably end up feeding them at home. I've had to sell off most of my flock [of sheep] already to pay for animal feed." From a flock of more than 200, he has only 40 sheep left.

Khan al-Ahmar is one of 20 Bedouin communities in the E1 area outside Jerusalem that are scheduled to be evacuated. Bedouin families have lived in this village since 1951, after they fled as refugees from the Negev during the Israeli war of independence.

They live in the West Bank, but their land is controlled by the Israelis as it falls within Area C. The EU is funding Oxfam to run development programmes here. The Palestinian Authority is drafting a strategy to address their needs – but, ultimately, their fate is in Israeli hands.

In 1975, Israel declared the area a closed military zone. Today, almost every structure has been issued with a demolition order. A spokesman for the Israeli civil administration confirmed it is negotiating with the E1 Bedouins to move them and is investigating the dump as a possible relocation point.

"We are waiting for the results of an investigation into the health impacts of living on that site," Major Guy Inbar says. "I know they don't want [to move] but because they are living illegally, we have to find a better option within the law. Why now? Because now we want to enforce the law."

Unlike the Jahalin, Bedouin groups in the Negev have cultivated their land since the 16th century. They are also Israeli citizens, and yet 35 of their 46 villages are not recognised by the state. As a result, the 90,000 residents live without basic services such as water, electricity, healthcare, education or paved roads. And they are not allowed to build permanent structures.

Thabet Abu Rass, the Negev director for Adalah, an organisation that offers legal advice to the Arab minority in Israel, describes a painstaking fight for the rights of unrecognised villagers. "We have to petition the high court for each basic service, like water. Most of the time we win the cases – but the problem is implementation. Sometimes it takes 10 years. Or they grant us 'minimal access' to water, which means one tap three miles from the village."

According to a pending law for the regulation of Bedouin settlement in the Negev, due to be presented to the parliament this month, these villages will be evacuated in the next five years and ecah of their inhabitants compensated to move to one of seven government-planned townships – the poorest towns in Israel, with some of the highest crime rates.

Abu Rass argues that while the Bedouin are ill-equipped to survive in a town, they are excellent farmers who would thrive with state support to cultivate their land: "The Israelis say they want to modernise them. But modernisation doesn't necessarily mean urbanisation."

Information gathered by Oxfam from Bedouin families in the West Bank last year suggested that selling animals, mostly sheep, can earn a herder as much as £21,000 in a year. The problem is that as their grazing land has diminished, about half of this income is now spent on animal feed. Add to that the costs of trucking in water and paying for fuel for electricity generators, or investing in solar panels, and there is very little cash left over.

Mark Regev, a spokesman for the Israeli prime minister, says there is understanding between the government and the Bedouins that the situation is untenable. He insists, contrary to what is laid out in the proposed legislation, the Negev herders will be offered a choice to move to a town or rural village.
"The pockets of poverty and neglect in Bedouin communities must end. One [Negev] village is right next to a terrible, polluted dump. No one should be living next to a toxic dump," Regev says. "The solution is that all Bedouin[s] live in recognised communities where they receive the services they deserve."