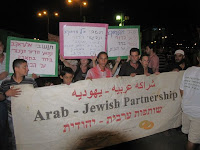 Following the Jewish National Fund’s announcement at last week’s Sderot Conference that it would be investing NIS 1 billion toward further Negev development, Beduin rights advocates have expressed concern that the investment will deepen already profound rifts between the Jewish and Beduin Negev residents.
JNF chairman Efi Stenzler unveiled plans to invest NIS 1b. in the next few years toward the construction of thousands of new housing units and related infrastructural development, in the hope of strengthening the Negev region and fulfilling a “Zionist vision” by attracting young people to move there. While the Negev has an area of 1.2 million hectares, or 60 percent, of Israel’s territory, it is home to only 600,000 people, or 8% of the country’s population, according to the JNF.

Although the difference in average real estate in the Center and the Negev was only about 10% in the 1970s, in now stands at 400%.

The organization will be working to develop the region in conjunction with architect Shamai Assif, various government ministries, the Israel Lands Authority, mayors and heads of local councils, regional councils and settlement movements, the JNF reported.

“The JNF will continue to help reinforce communities in the Negev,” the statement said, noting that the group intends to employ the already vibrant Negev population centers as “anchors” for future development.

Some of the specific plans for the area include upgrading the number of plots in Karmit from 250 to 700, creating 120 land plots in both Neveh Netzarim and Bnei Netzarim, expanding the Shlomit temporary camp from about 30 families to 500, and preparing another 32 lots in Kadesh Barnea – a community established by the JNF. In addition, on Amatzya, a moshav near Lachish, the JNF is preparing to create 200 housing units for people evacuated from Gush Katif in 2005, and the organization will be erecting a new community for about 100 evacuee families near Nir Akiva, according to the organization. The JNF and its partners will also help develop tourist facilities in Tzukim, and will prepare the communities of Idan, Paran and Ein Yahav for further agricultural development.

“This is a plan that is expected to help change the face of the Negev, encouraging families to move from the center to the Negev, together with shaping the existing communities, which will lead to a transformation in the residential experience,” Stenzler said. “All this in cooperation with heads of councils who are doing a great job and who together are transforming the region into a center of attraction, and there is hope in [first prime minister David] Ben-Gurion’s vision of making the desert bloom.”

The organization stressed that it is continuing to advance agricultural infrastructure in the Central Arava region, and said it will be preparing 5,000 hectares of land for citrus cultivation, in addition to the 1,500 already prepared for that purpose.

As far as the Beduin portions of the Negev Desert go, the JNF emphasized that it is currently working on many projects involving this sector, such as the recently completed first stage of Nahal Gerar Park in Rahat, which amounted to a NIS 1 million investment.

But advocates for the Beduin community fear that the JNF’s development efforts will only further destroy “entire villages,” as occurred with al- Arakib village in 2010, during a JNF forestation project.

“There is minimal investment in Beduin communities relative to the size of the population,” said Haia Noach, executive director of the Negev Coexistence Forum for Civil Equality.

“The JNF’s plan reveals that it is continuing to not only ignore the reality of the Negev’s diverse population but inflame the relationship between the Jewish and Beduin communities,” Noach said. “It is clear that the mission of the JNF is to Judaize the Negev at the expense of Israel’s Beduin citizens.”

Posted by Jewish Alliance for Change at 5:10 PM