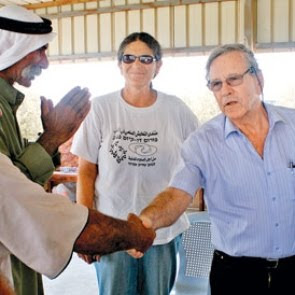 Where: IKAR, 5870 West Olympic Blvd., ﻿Los Angeles, CA 90036﻿ (map)
Description: Join us after Shabbat lunch for a special discussion. For some Jews, Israel's Negev Desert is the "last Zionist frontier," a "barren wasteland" in need of development. For Israel's Bedouin citizens, it is an ancestral homeland, rich with tradition and sustenance. Arabs and Jews live side by side in the Negev, but their access to basic necessities such as water, energy, and medicine varies widely. With a rapidly expanding population on a small land mass with dwindling resources, the age-old Zionist question to develop or to preserve continues to arise. The development of the Negev for a new wave of Jewish settlements is increasingly undermining Israel's commitment to democracy and civil rights. Must we support development at the expense of democracy in the Negev?
About the Speaker: Devorah Brous lived in Israel and worked with Bedouin for 15 years. She is the founder of BUSTAN, a Jewish/Bedouin civil rights and environmental justice NGO in the Negev, where she served as Executive Director for 9 years. She currently serves as co-director of the Campaign for Bedouin-Jewish Justice in Israel, a Project of Rabbis for Human Rights-North America and the Jewish Alliance for Change. She holds two Masters degrees in Israel Studies and Development Studies.
Listed on the IKAR website events calendar
Posted by Jewish Alliance for Change at 1:10 PM